A mentally unstable man — reportedly angry at the IRS — attempted suicide in front of hundreds of Today Show fans just minutes before the show was to go live. 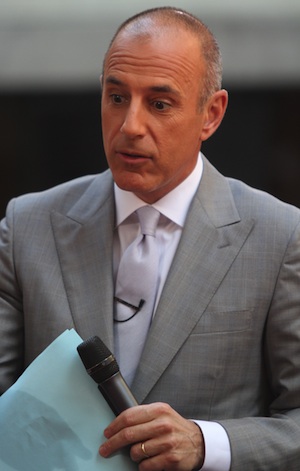 In a horrific scene this morning, the Today Show witnessed a brutal stabbing as the popular morning news program was just about to air live to millions of viewers.

A seemingly inconspicuous middle-aged man stood outside of 30 Rockefeller Plaza Thursday morning and began shouting at Today Show fans. Witnesses report the man was extremely upset at the IRS and frantically asked bystanders to review documents he held clenched his hand.

*Trigger warning* Despite law enforcement’s attempt to calm the man down, he shockingly pulled out a 4- inch blade and began to cut deeply into his wrists. Some witnesses report the unidentified man shouted, “I’m going to cut myself!” before he pulled out the knife.

The man lost so much blood in the seconds following his suicide attempt that law enforcement officials were unsure how to best contain the scene.

The disturbing incident left the entire cast, crew and fans shaken with just a few minutes until air time. As the Today Show went live, the suicidal man remained on the sidewalk as he received medical treatment. Matt Lauer addressed viewers at home to explain why the Today Show did not begin outside with their fans as normal.

“There was an incident a short time ago out on the Plaza that we want to tell you about. A man out there attempted to harm himself with a knife — he did manage to cut himself. He was controlled by our security team out there, however he did harm himself in some way and so he’s now being attended to by medical personnel. There was a knife involved, as we just mentioned, so we are keeping that area clear for law enforcement and not getting out there to confuse the situation at all.”

How to help children understand suicide >>

Lauer thanked the security at Rockefeller Plaza and reassured the public that that the stabbing incident was contained and no longer posed a threat to the safety of the fans.

Given the recent murder of an innocent man in London last week — who was brutally killed in broad daylight by two deranged men — some Today Show fans were terrified when they saw this individual had a knife.

The Daily Mail spoke with Kellie Ostransky, a Phoenix resident, who visited the Today Show taping as a birthday present from her sister. “The first thing I thought about was that solider in London, and I thought, ‘Oh my God, this is happening.'”

Kellie’s twin sister, Kimberlee Ostransky, echoed her fears. “He threw papers up because nobody was taking them. He started cutting his wrists. People were running and screaming,” said Kimberlee.

No one else was hurt in the suicide attempt, but the scene was gruesome for custodial crews to clean.

We sincerely hope this man is able to get mental health support he needs. If you or anyone you know is struggling with suicidal ideation, please get emergency help.