Justin Bieber has reportedly added his name to the list of celebrities that are signed up for a space flight with Virgin Galactic. Will the Biebs actually blast off into space?

Teen star Justin Bieber has been saying for a while that he’s interested in traveling to the stars. The 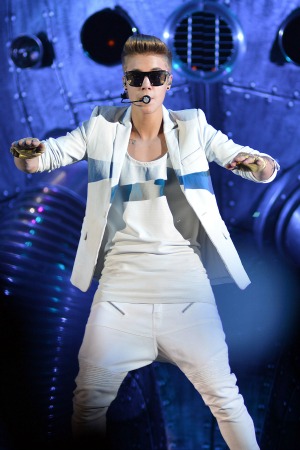 singer even posted on Twitter a couple months ago that he wanted to do a concert in space.

“Great to hear @justinbieber & @scooterbraun are latest @virgingalactic future astronauts. Congrats, see you up there!”

So far, there’s no been no word from Bieber on whether or not he really has signed up for a suborbital space flight with the airline (or would that be spaceline?). But he did retweet Branson’s message, which could be a sign that the singer is indeed heading off into orbit. Scooter Braun also retweeted the message, adding, “I’m going to space momma!” which would also suggest that the two really did sign up.

It’s not like Bieber and his manager couldn’t afford the flight. Tickets for a ride on Virgin Atlantic’s rocket-powered SpaceShipTwo cost $250,000 a seat, but somehow we think that the two of them have that kind of cash. After all, the singer’s net worth is somewhere in the neighborhood of $110 million and we can only assume that Braun gets a nice percentage of that.

Virgin Galactic is working hard to make commercial space flight a reality and if all goes well, the company’s first suborbital flight could happen by the end of the year, which would make Bieber and Braun’s space dreams a reality. During the flight, the two would travel 62 miles in altitude and feel weightlessness for a few minutes, so let’s hope that they both manage to keep their lunches down.