Bobbi Kristina Brown is denying she was evicted after a nasty note she left for neighbors surfaced on Reddit. 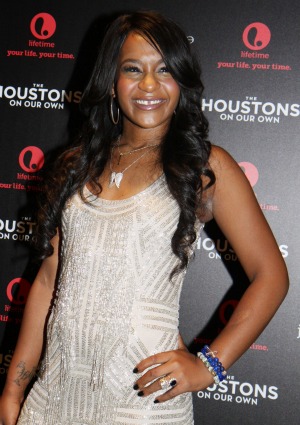 Was Bobbi Kristina Brown evicted? Yesterday a note turned up on Reddit purported to be hate mail left by Whitney Houston’s daughter after she was allegedly kicked out of the posh Atlanta-area pad she shared with her on-again, off-again boyfriend Nick Gordon, but she says that isn’t how it went down.

A friend of the neighbor’s told Reddit readers that the couple had multiple noise complaints against them and their constant partying was disturbing the family, including a one-year-old child.

But Brown told a different tale to pals.

“Bobbi felt that the neighbors were always in her business and looking to get some sort of media attention,” a source told E! News. “Krissy lives on the 2nd floor and as with anyone who lives in a first floor apartment you should expect to hear some noise above you. But apparently these people have been nuts for a long time. So she decided to move out. She was not evicted.”

The 20-year-old, who was engaged to her informally adopted brother before breaking up last fall and apparently getting back together and shacking up, allegedly left the note on her neighbor’s door after she left the building for good.

“Thanks… You are s*** at the bottom of our shoe. Thank You for making a hard year harder,” the note, posted on Reddit, read.

“You are a miserable couple and always will be. You were honored to have us living above you and you couldn’t stand such a young beautiful couple far more successful than you ever will be. I pray your misery doesn’t rub off on your innocent little baby.”