Liam Hemsworth is one step closer to leading-man status. The Australian actor headlines the drama Paranoia opposite Gary Oldman and Harrison Ford. We’ve got the first trailer, and boy, does it look intense! 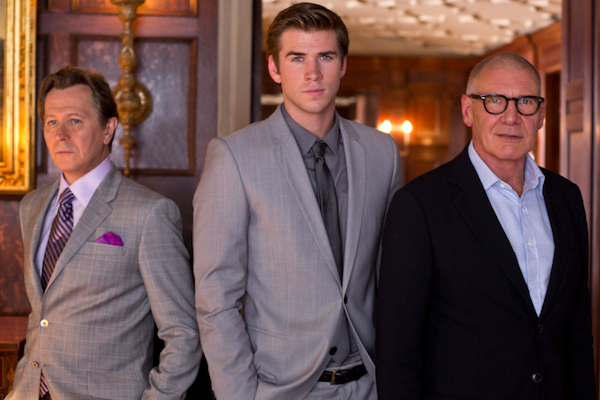 The Hunger Games‘ Liam Hemsworth is trading his khakis for designer suits. The actor stars in Relativity Media’s Paranoia, which puts him in the middle of a corporate battle. The studio’s released the first trailer for the film, which is sure to have you on the edge of your seat.

Paranoia centers on Adam Cassidy (Hemsworth), a tech guy trying to work his way up the corporate ladder. He has blue-collar roots and an ailing father (Richard Dreyfuss) in desperate need of health care. A billionaire by the name of Nicholas Wyatt (Gary Oldman) offers him a helping hand — for a price.

Wyatt wants Adam to spy on his former mentor and current rival Jock Goddard (Harrison Ford). Wyatt gives him the clothes, the apartment and cash to fool the elite. He creates a facade, which gets him a job that allows him to steal trade secrets. Adam reluctantly agrees but has no idea what he’s in for.

Hemsworth shares some intense scenes with Oldman but he told Yahoo! Movies he used his fear as fuel. “He just came in with so much intensity — and he’s yelling and spitting in my face in this scene, interrogating me, and everyone on set just went dead silent,” the actor recalled.

Get a peek at Oldman’s rage in the new Paranoia trailer.