SheKnows talked to Little Big Town’s resident fashionista about having it all as a mother and wife, country music and the value of a good T-shirt. 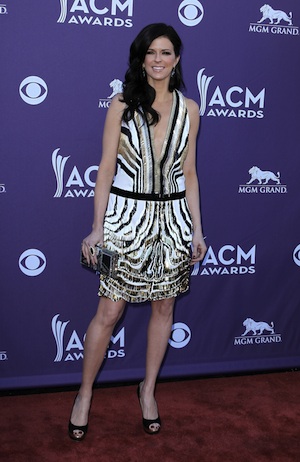 After Little Big Town announced it will be hosting the TV special CMA Music Festival: Country’s Night to Rock, airing this August, we talked to Karen Fairchild about her life on the road.

In fact, married LBT members Jimi Westbrook and Karen Fairchild just celebrated their seventh wedding anniversary by playing a festival in Virginia Beach with thousands of their fans.

As we all know, taking care of your relationship, having a career and being a mom isn’t always easy — especially for a country music star who is married to her band mate.

“I’m trying to raise [son Elijah] the way I want him to be raised and spending time with him and family — and yet integrate being a showman on stage and an entertainer, which is my job. I feel deeply connected to the fans and the music we are making. So, it is hard to be good at all of it.”

It’s nice to know that even country stars like Fairchild feel the way we all do. She explains, “There are days where you feel like you’re always behind and you can never catch up — whether it’s on the family side or the business side. I am just doing it like anybody else would — the best I can.”

While there might be a little addition in the future, Fairchild says, “Right now we’re just really happy where we are.”

But while things are great in their personal life, LBT’s new video for “Your Side of the Bed” paints a very different picture about a relationship.

Fairchild and Westbrook knew that even though it would be hard, they wanted to be in the video. Fairchild explained, “We could have had actors portray the tension in the relationship or we could do it ourselves.”

She went on to say that the video’s director challenged them to “play this out as a hard day on the road and let it be honest, and people will really relate to it.”

Ultimately, the band wanted both the video and the song to give an honest and compelling look at a troubled relationship. “That’s what music is all about: is telling honest stories. That’s why country music is so great.”

While Little Big Town has been around for a while now, Fairchild tells us that there are some great new country stars coming up. Her favorite newcomer is singer/songwriter Kacey Musgraves. “I just think she’s got a unique voice for country music and I’m excited that people are discovering her, and this chick’s going to grow and grow. She has super talent and she represents Nashville really well.”

See our review of Kacey Musgraves’ song “Follow Your Arrow” >>

If there is anything that Fairchild loves as much as music, it’s fashion. She explains, “It’s another expressive outlet for me.” In fact, if you head on over to Pinterest and look at her fashion board, you might just catch a glimpse of what she will be wearing to the CMT Music Awards or the upcoming CMA Music Festival.

“I had my eye on a pair of Alexander Wang boots and I ordered them thinking that I might wear them to the CMAs. I just thought they were so dramatic and would be so fun on stage.”

But while Fairchild is crazy about fashion, she isn’t crazy about those sky-high prices and is always looking for a great deal. When she has some time, she will hit a local vintage or thrift store to find a great accessory.

And when it comes to the staple wardrobe pieces, she will hit up Target or Gap. “I love to find a good find that you can just use endlessly in your wardrobe — T-shirts, tank tops — and then I’ll splurge on the more dramatic pieces — a beautiful kimono, a dramatic top or a beautiful leather jacket.”

Which star’s summer fashion do you covet? Take our quiz and find out >>

Fairchild’s go-to clothing right now? A T-shirt. “If you can’t put a T-shirt with it then I probably won’t buy it.”

We will be watching to see if Fairchild is wearing a T-shirt, those Alexander Wang boots or something even more fashionable at this year’s CMT Music Awards.