Snooki reveals how she knew Jionni LaValle was the one for her. 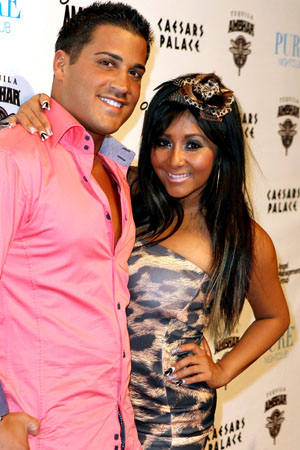 “It was soon, probably within the first three months that we were dating,” she told YourTango.

And how did she know?

“I just realized that he was everything I’ve always wanted, and I could talk to him about anything,” she said. “Once you realize the guy you’re in love with can be your best friend and lover, I mean, it’s meant to be.”

After just three months? Maybe we’re just a little shy when it comes to saying the big “L” word, but that seems a little fast.

Carole Lieberman, M.D., psychiatrist and author of Bad Girls: Why Men Love Them & How Good Girls Can Learn Their Secrets, says it’s not uncommon to fall in love quickly, but a couple should definitely take time to grow their relationship before walking down the aisle.

“Some couples know that it’s true love at first sight,” Dr. Lieberman says, “but most couples should take their time — at least a year — before deciding that this is ‘the one.’ They will have lots of obstacles to work through together before making it down the aisle.”

However, it does seem like the parents of baby Lorenzo are taking their time — they haven’t even set a date yet, according to Snooki.

“I have no idea about anything yet. We realized we want to get married sometime next year,” she told YourTango, adding that the wedding will likely take place in New Jersey.

She doesn’t have the dress yet, either.

“I’ve started to look, and I love open-back dresses with maybe a big bow on the butt,” she said. “I honestly have no idea, but whatever I find is going to be so elegant but gaudy at the same time. You can have the best of both worlds!”

One thing it won’t be?

“It won’t be leopard like everyone thinks — that’s for my bridesmaids,” she said.

How long did it take for you to know that your partner was “the one”? Sound off in the comments below!