Just one day after announcing her pregnancy, Jennifer Love Hewitt and her baby daddy Brian Hallisay announce that they’re engaged.

Things are certainly moving fast in the world of Jennifer Love Hewitt. Just one day after announcing that 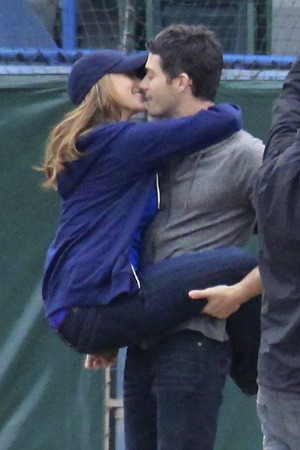 she was pregnant with her first baby, we’ve gotten news that Hewitt is engaged. The hubby-to-be is of course Brian Hallisay, who is also the father of her baby.

A rep confirmed the news to People, saying simply: “Yes, they are engaged.”

The two met when they costarred together on the NBC series Love Bites, and now work together on Lifetime’s The Client List, where Hallisay plays (interestingly enough) Hewitt’s character’s estranged husband on the show. They’ve been together for around 15 months and are living in a $3 million home that Hewitt just purchased in Pacific Palisades.

Once the news got out that the happy couple was expecting, everyone wanted to know if a wedding was in their future, but the two were reluctant to divulge whether they were engaged or not.

“She loves Brian to death and thinks he’s Mr. Right, but she’s being very cautious about what she says publicly,” a source revealed to RadarOnline.

Well, it looks like it didn’t take long for the couple to decide to let the world in on their happy news. They waited one whole day before revealing the engagement. Another source tells Us Weekly that the actress is about three months along.

Jennifer Love Hewitt and other celebs without makeup: Do you recognize them? >>

Hit series, hot husband-to-be, brand new home in Pacific Palisades and a new baby all happening at once. Talk about an amazing year.

“This is a wonderful time and we are looking forward to starting our family together.” Hewitt said in a statement through her publicist.

“Jennifer is happier than she’s ever been,” another source revealed. “She can’t wait to set up house and start a family with Brian.”

After losing her mother last year to cancer, this is all wonderful news for Hewitt, who was very close to her mom.