Whitney Houston’s daughter is being called out for her bad behavior by her former neighbors after getting kicked out of her posh pad. 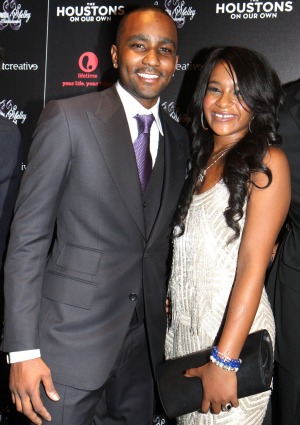 The daughter of Whitney Houston and Bobby Brown has been kicked out of her Atlanta-area apartment, and she is laying the blame squarely on her tattletale neighbors.

Bobbi Kristina Brown and her on-again, off-again boyfriend/pseudo-brother Nick Gordon were allegedly evicted from their Alpharetta, Georgia, apartment after months of noise complaints, and now a friend of the couple’s former neighbors has posted a note on Reddit claiming it was written and left by Brown herself.

“My friend and his family live in the apartment under Bobbi Kristina Brown (Whitney Houston’s daughter). After 6 months of complaints, she was finally kicked out. He found this on his door today,” Redditor cjharlin wrote, sharing a photo of the note.

“Thanks. You are s*** at the bottom of our shoe,” Brown allegedly wrote. “Thank you for making a hard year harder. You are a miserable couple, and always will be. You were honored to have us living above you and you couldn’t stand such a young beautiful couple being far more successful than you ever will be. I pray your misery doesn’t rub off on your innocent little baby.”

The Redditor confirmed the couple who received the note have a 1-year-old child and that they had to call police multiple times over loud partying at Brown’s apartment multiple times.

“Mostly noise,” cjharlin wrote in the Reddit thread. “Partying until 5AM on a weekday. That sort of thing. My friend has a 1 yr old, it was a major pain in the butt.”

Both Brown — who is livid over a book her grandmother Cissy Houston wrote about Whitney — and Gordon have yet to confirm the eviction or the authorship of the note.