LeAnn Rimes is taking a stand on the issue of bullying by raising one solitary finger up high. Check out the singer’s photo for The New F Word campaign here! 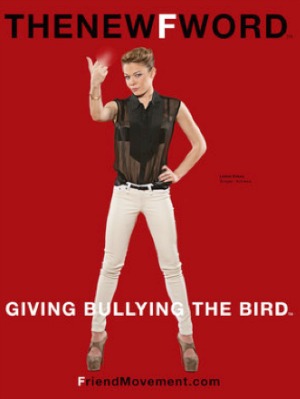 LeAnn Rimes is giving bullying the bird. Check out a photo of the singer with her middle finger raised to the camera as part of The New F Word campaign by Friend Movement.

Tweeting the photo seen here, the singer wrote Monday, “I’m so proud to be a part of this campaign.”

Designed to “help show positive anti-bully images through art and media,” the movement’s site says it “aims to encourage the use of the word FRIEND to project inner strength and confidence.”

After bluntly laying out the types of “F” words we normally think of in a headline reading “FATTY, FAGGOT, FREAK … WE DON’T THINK SO,” the page goes on to ask, “HOW ABOUT FRIEND”?

You may recall that Rimes has been involved in some bullying drama herself, entering treatment for stress in late August 2012 after online attacks became too much to handle.

“There has been this cyber-bullying that has been going on for a considerable period of time,” Larry Stein, Rimes’ attorney, said at the time.

“Apparently, most of this started when LeAnn started dating Eddie Cibrian…These women [on Twitter] have been merciless — vitriolic in their attacks,” he added. “Like most celebrities, Rimes didn’t like it, but she hoped things would get better.”

In her first post-treatment interview, the 30-year-old shared, “I think it’s really hard to deal with Twitter and Facebook and all these social media outlets, and it’s hard to take it day after day of reading and seeing things that someone you don’t even know says about you. As much as you said you don’t want it to penetrate, it does, because you’re human.”

LeAnn Rimes is “secure,” not anorexic >>

What do you think of The New F Word campaign and LeAnn Rimes’ photo?