Kate Winslet is pregnant! Word breaks the actress is expecting a baby with her third husband, a man who goes by the name Ned Rocknroll. 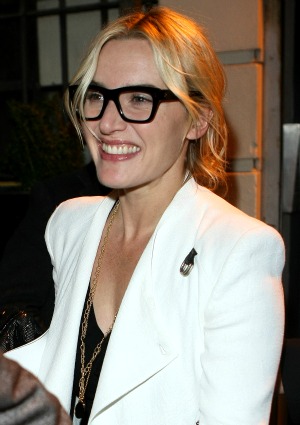 Kate Winslet‘s having a baby! Confirming the pregnancy news, a rep stated Tuesday afternoon the actress and new husband Ned Rocknroll are expecting their first child together, adding that the pair is “delighted.”

The baby, whose due date has not yet been announced, will be the star’s third child with her third husband.

Daughter Mia, now 12 years old, was born during Winslet’s marriage to Jim Threapleton. Her son, 9-year-old Joe, was born just before she and Sam Mendes celebrated seven months of marriage in 2003. Winslet and Mendes parted ways in 2010.

Winslet, seen here in mid-March, met her new husband in August of 2011 while both vacationed at the Necker Island home of Richard Branson, who is Ned’s uncle. Ned, by the way, was given the name Abel Smith at birth.

Around that same time, she said in an interview about her “complicated” new story, “Those days of every child having a mummy and daddy who lived at home — Daddy went to work, and Mummy stayed at home and took care of everyone — those days have almost gone, and it’s so much more unconventional now.”

The 37-year-old added, “I feel that I’m just at the beginning of a new narrative, and it’s incredibly exciting.”

During a recent interview with Harper’s Bazaar, the Titanic star opened up about her rocky relationships, sharing, “I’ve really learned a great deal about myself, in the last four years in particular. I think I can see more clearly now — about how the pattern of past experiences has shaped who I am, and the characters I have played — and I’m grateful for that.

What name do you think Kate Winslet and Ned should pick for baby Rocknroll?