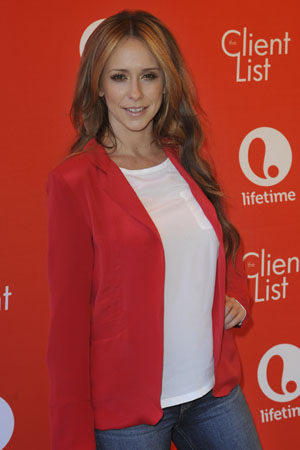 Jennifer Love Hewitt is about to swap her massage table for a changing table: she’s expecting her first child later this year with boyfriend — and her The Client List costar — Brian Hallisay.

“This is a wonderful time and we are looking forward to starting our family together,” the pair said in a statement released by her publicist.

The happy news comes after the actress lost her own mother to cancer. Patricia Hewitt and her daughter were close — and the 34-year-old credits her mom with keeping her balanced during her meteoric rise to fame in the late ’90s.

“I’ve tried not to act too crazy or disrespect the opportunities that I have been given or the people that have believed in me,” she told Parade in 2012 of her mother’s influence. “I’ve been really blessed and I don’t necessarily know what keeps one person here longer than somebody else, but I couldn’t feel more grateful.”

This is exactly the happy news we’ve waited to hear about Hewitt. The actress — who’s dated everyone from John Mayer to former fiancé Ross McCall — felt like “a fool” after she expressed her desire to date Adam Levine.

“It was really sweet and flattering. Beautiful life, you know, when a beautiful woman says nice things about you,” Levine told Ellen DeGeneres when asked about Hewitt’s public declaration. He turned down the date, though.

“The moment when you make a comment about something or someone and the world makes you feel like a total fool. #keepcrushesquiet,” she tweeted in April 2012.

We’re thrilled for Hewitt and Hallisay, but we still have one question: Will she continue to vagazzle through her pregnancy? That would make for an interesting conversation at the OB-GYN!