Justin Bieber uses Instagram to tease his new single “Heartbreaker” and share an image of the cover artwork with his fans.

Justin Bieber has been a very busy boy in the past 24 hours. Bieber is known for being pretty active on 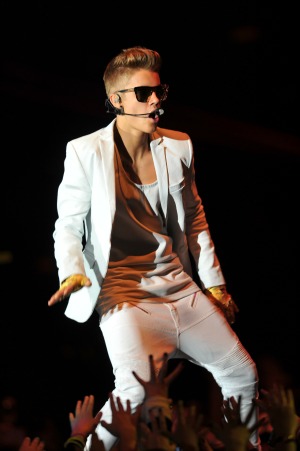 Instagram and he used the site to tease his new single as well as release the cover art for the track.

The first message the singer released was simple. It just said, “. Coming soon” and showed a picture of the cover art, which depicts a purplish colored heart that looks like it might be made out of sand, though it also kind of looks like some sort of powdery makeup (you know, like what you see in a magazine ad for the latest eye shadow), but that could just be how us girls are seeing it. In the upper left-hand corner of the image, there’s a chubby little Cupid aiming his arrow at the heart, which looks like it may have already been hit a few times as it seems to be crumbling.

The second message that Bieber posted accompanied the same image and just said, “Tell a friend to tell a friend.”

Then came another message, “Don’t tell me your my. #justinbieber #heartbreaker.” We’re trying hard to ignore the grammar issue in that sentence and give the guy the benefit of the doubt. After all, maybe his phone wouldn’t let him put in the appropriate punctuation mark there.

This morning came another message from the singer, with the same artwork. It just said, “Heartbreaker #Justinbiebernewsingle.”

Right now there are no details about when the single will be released or if it will be a part of his next album. He’s keeping that info under wraps for the moment, but we have a feeling that when he does feel like divulging those tidbits, they’ll probably end up on Instagram, too.