Channing Tatum and his wife Jenna have officially given their new bundle of joy a name, Everly Tatum. The baby arrived on Friday, May 31 in London. 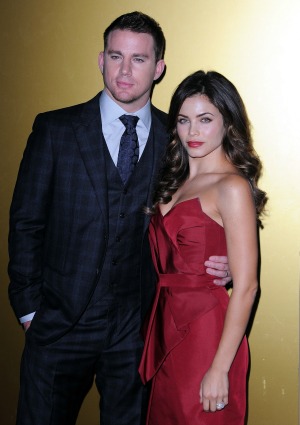 While the world heard the news over the weekend, the parents have finally confirmed the news. Channing Tatum and his wife Jenna Dewan-Tatum are first-time parents to a baby girl.

The couple posted a statement on Tuesday on Tatum’s official website that not only announced their daughter’s birth, but it also revealed her cute name.

It said, “Jenna Dewan-Tatum and Channing Tatum are thrilled to announce the birth of their daughter, Everly Tatum, who was born on May 31 in London. Sending love and light to Chan, Jenna and Ms. Everly!”

Baby Everly was born overseas because Tatum is currently filming Jupiter Ascending in London. The entire family, including their dogs, relocated for the birth. People‘s “Sexiest Man Alive” didn’t get much time off, though. He was spotted back on set on Monday just days after his daughter’s arrival.

The family isn’t doing much of a maternity/paternity leave either. Tatum is scheduled to be back in the U.S. in July to continue shooting his film in Chicago. Dewan-Tatum is set to begin shooting her new Lifetime series Witches of East End in Vancouver. The show debuts in the fall.

In addition to the busy shooting schedule, Tatum will be hitting the media circuit to promote his summer flick White House Down, also starring Jamie Foxx and Maggie Gyllenhaal. The film hits theaters on June 28.

Hopefully, the new parents will get a little downtime to enjoy their new bundle of joy at some point. However, it does look like they’ll take their new roles in stride.

As the new mother told People magazine before the birth, “Who knows what kind of parents we’ll be? We have two dogs, so we’ve had some practice! And as soon as this baby comes into the world, Channing and I will figure it out real fast.”