Move over Ke$ha, Miley Cyrus wants to be the new all-night party girl as she explains in her new single, “We Can’t Stop.” 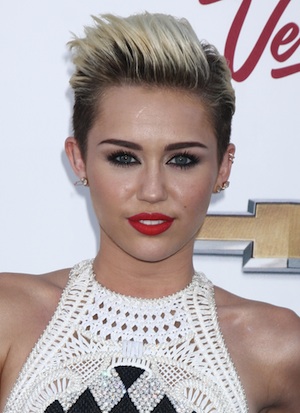 It’s been a pretty big year for Miley Cyrus. The 20-year-old not only just topped Maxim’s Hot 100 list, but she either is or isn’t still engaged to The Hunger Games hottie Liam Hemsworth.

And to add to all of this, she will be releasing a new album later this year. The first track from her untitled fourth studio album is called “We Can’t Stop.” Miley went on Ryan Seacrest’s Los Angeles radio show to premiere her song.

Cyrus told Seacrest, “Everyone always judges and says what they want, but my fans… have really stood by me no matter what I’ve been through… and this is a song that says where I’m at in my life right now.”

Well, according to the lyrics of her new single, she’s at quite an interesting place in her life.

“Can’t you see it’s we who own the night/ Can’t you see it we who bout’ that life.” I don’t know, Miley, I’m sure that Ke$ha owns the night, but you ladies will have to fight it out between yourselves.

Cyrus goes on to give a shout-out to “my homegirls here with the big butts/ Shaking it like we at a strip club/ Trying to get a line in the bathroom.”

Shaking it like she’s at the strip club? Getting a line in the bathroom? Miley, I am clutching my pearls. Where did the sweet girl with the Nashville twang go and why is she talking about girls with big butts?

Miley has clearly done some growing up in the three years since her 2010 album Can’t Be Tamed. She explained to Billboard, “I really have more of a connection of who I am, and I feel like I can maybe express that more in my music now.”

Today’s release of “We Can’t Stop” is hot on the heels of last week’s release of her collaboration with Snoop Lion off his album Reincarnated.

A song “for the ones who ain’t here,” “Ashtrays and Heartbreaks” has Snoop rapping over a reggae beat while Miley comes in at the bridge urging us to, “raise a glass to the memories/ set ‘em free and fill up all those ashtrays.”

I’m not sure what Miley is smoking, but when you’re around Snoop, those ashtrays are going to fill up pretty quickly. Needless to say this is quite a departure from the once squeaky-clean Hannah Montana.

But it really isn’t anything new. Cyrus watchers have been noticing a descent from Disney darling to hip-hop party girl. All you have to do is look at her buzzed platinum blond locks and tattoo additions to see where she is headed musically.

If these glimpses of Miley are what’s to come from her upcoming album, who knows if she will be able to gain new fans of hip-hop and without alienating her current fans. But Miley’s pretty resourceful and even though “We Can’t Stop” is a bit underwhelming, I wouldn’t count her out just yet.

Listen to Miley’s new track, “We Can’t Stop,” and let us know what you think in the comments below.