The World War Z premiere has gone global. On Sunday, the upcoming film made its debut in England. Star Brad Pitt was in attendance as were Angelina Jolie and the rock band Muse. 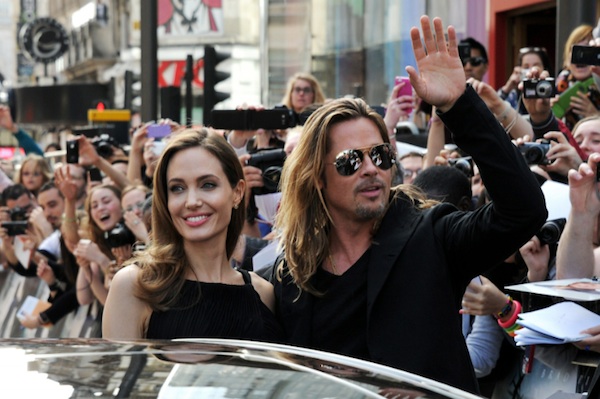 Later this month, Paramount will release the highly anticipated World War Z. It’s the big screen adaptation of Max Brooks’ popular novel of the same name. The Oscar-nominated Brad Pitt headlines the film, which has elements of horror, action and sci-fi.

On June 2, Pitt attended World War Z’s global premiere at London’s Leicester Square. He was joined by director Marc Forster, co-star Mireille Enos (The Killing) and his partner, Angelina Jolie. Pitt described the film as “great fun,” and he’s happy that everyone else can finally see it.

Next, Paramount pulled out all the stops as fans were treated to a free performance by British rock band Muse. The concert took place at the Horse Guards Parade grounds and attracted roughly 15,000 people. The crowd listened to several of the group’s songs, including “Follow Me.”

World War Z centers on a United Nations worker named Gerry Lane (Pitt). His family — as well as humanity — is put in danger after a pandemic breaks out. Lane’s in a race against time to remedy the fast-spreading disease before it’s too late. World War Z also stars Matthew Fox, David Morse and James Badge Dale.

Everyone wasn’t lucky enough to attend the film’s world premiere. But don’t fret — we have footage of the glitz, glamour and music. You can watch it right here!

Will you be seeing World War Z later this month?