With the CMT Music Awards airing live Wednesday night at 8/7c, so we decided to give you a little extra incentive to tune in… 7 sexy “incentives” to be exact, although we’re pretty sure we could have come up with 100.

Everyone knows that one of the best parts of watching awards shows is tuning in early to catch all the gorgeous A-listers sauntering down the red carpet in their dreamy designer dresses and dapper suits. This year, CMT’s Cody Alan, Katie Cook and Allison DeMarcus will start streaming live on CMT and CMT.com at 7 p.m. ET/PT, bringing viewers exclusive interviews with some of the sexiest stars in country music and beyond. 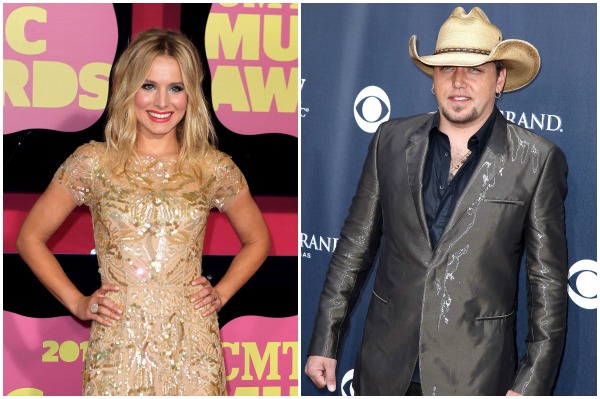 Hosts with the most

She’s starring alongside Don Cheadle in Showtime’s House of Lies. He is one of country music’s most successful acts. But on Wednesday night, Kristen Bell and Jason Aldean will be performing together — as co-hosts. That means we, the audience, will be fortunate enough to get copious amounts of face time with both of these beautiful stars.

There’s a battle being waged over what constitutes a country vs. pop artist, but that didn’t stop CMT from incorporating several crossover acts into the night’s star-studded repertoire. We can’t wait to see beefcake rock star Lenny Kravitz hit the stage for a musical mash-up with none other than co-host Jason Aldean. No word yet on what the two will perform, which makes it one smokin’ hot surprise.

Who doesn’t love Carrie Underwood? We’ve got a girl crush on her in a major way, and it’s probably a safe assumption that most men wouldn’t mind if she shot a smile in their general direction. One of our all-time favorite aspects of country’s queen of hearts, though, is that she never fails to bring the house down when she performs. We’re psyched she is set to take to the CMT Awards stage, hopefully to perform her new hit, “Two Black Cadillacs.”

You may be thinking we’d use any excuse to objectify Luke Bryan, and, well, you’re probably right. C’mon, give us a break! OK, OK… we’re sorry. Only we’re really not. We don’t think he’d mind! As for his wife, we’re sure she doesn’t either — hell, if we were her, we wouldn’t be able to focus on anything other than that hot little tater tot she calls her hubby.

The Nationwide On Your Side Award

If you’re scratching your head and wondering what the Nationwide On Your Side Award is, we’ll sum it up for you — full of hunky nominees, that’s what it is. (Seriously though, click here to get a real rundown.) The show’s sponsor, Nationwide Insurance, was nice enough to create this category for hot up-and-coming acts, who this year happen to be cutie pie country boys Lee Brice, Kip Moore, Florida Georgia Line and Hunter Hayes.

Love and Theft rockin’ out

Buddies Eric Gunderson and Stephen Barker Liles make up the country duo Love and Theft, which are — coincidentally — two thoughts that cross our brain whenever we see the over-the-top adorable fellas. Although the guys had their first No. 1 single back in 2011, they are just really starting to hit their stride, so we can’t wait to see what they have in store for their show performance.