Bruce Jenner doesn’t seem too pleased that Kim Kardashian’s baby daddy Kanye West has stayed in Paris for most of her pregnancy. He calls the rapper out. 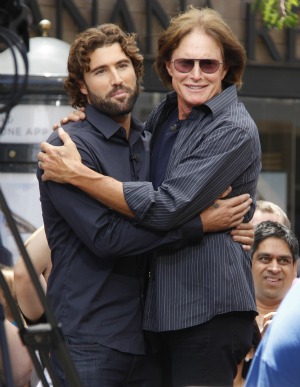 With a baby due next month, you’d think Kanye West would be doting on his pregnant girlfriend. However, Bruce Jenner is calling out the rapper over his lack of attention when it comes to Kim Kardashian.

In an interview with Extra, Bruce and his son Brody Jenner dished about the current season of Keeping Up with the Kardashians and Kim’s baby daddy.

Bruce told host Maria Menounos, “Actually, I have only met him once… Yeah, he’s not around, he was in Paris the whole time writing, and he just hasn’t been around.”

What’s was even more surprising was the moment Brody revealed, “I’ve never met him.”

Clearly there hasn’t been a lot of family bonding with the dad-to-be and the notoriously close Kardashian clan.

It’s ironic that Brody has joined the reality show to showcase his new friendship with Bruce after having a formerly distant relationship with his dad.

Brody told the entertainment host, “Over the years as I was a kid, I hate to say it, but Bruce wasn’t around all the time, he was sometimes, but we started hanging out and developing a relationship, and his whole life is on television.”

Bruce’s son slammed his dad just as Bruce had called out Kanye for similar behavior all in one interview. That’s some juicy family dirt!

Season 8 will revolve around Kim’s pregnancy and Brody and Bruce’s father-son relationship.

Bruce explained, “The first show is a lot with Brody and I… Kim is very involved… Just really all the different family issues we’re dealing with.”

If you missed Sunday’s first episode, you might have also missed the big news regarding the gender of Kimye’s baby. Spoiler alert…

With all of the excitement of the new season, will you be watching Keeping Up with the Kardashians?