SheKnows chats with Melanie Brown about the new season of the hit show America’s Got Talent and being a mom on the road and spills the dirt about a possible reunion with the Spice Girls. 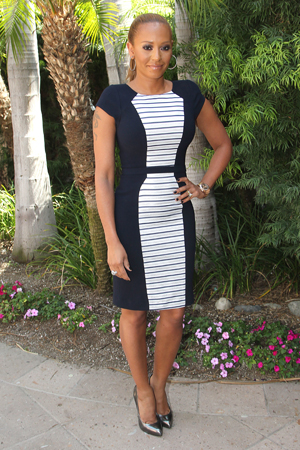 The Spice Girls might no longer be a group (as much as we wish they were!), but that doesn’t mean the girls have disappeared altogether. Victoria Beckham is almost always in the news alongside hubby David, Geri Halliwell recently appeared and sang on Disney Junior’s Henry Hugglemonster, and as for Mel B aka Scary Spice? Well, you can spot her on America’s Got Talent as its newest judge.

When comparing the U.K.’s The X Factor to America’s Got Talent, Mel B prefers the all-around competition. Why?

“Because you can be watching a great singer and then you’re watching 30 people on stage doing clogging and then watching a magician making something disappear,” she says. “I mean, it really is that diverse. I think it is just more entertaining when it is all around, and you just don’t know what to expect.”

Mel B had absolutely great things to say about her fellow judges on the show, including how she has known all of them prior to becoming a judge.

“Me and Heidi (Klum) have known each other for awhile, but Howard (Stern) and I actually met when I went on his show 16 years ago, and I found him completely inappropriate, which I absolutely love,” she says. “So me and him have like a love-hate relationship, and then I sit in between Heidi and Howie, so Howard is constantly saying joke after joke after joke, and I’m like, ‘Stop already, I don’t want to laugh anymore. Stop!’ ” she laughed, saying, “After 15 hours of jokes, I want to slap him.”

When co-judge Howie Mandel isn’t making her laugh, she says that she respects her fellow judges and enjoys working with the three of them.

“Our energy and our synergy are really good,” Mel B says. “Because we all are completely different; we have all come from four different backgrounds of entertainment. So we fully, completely respect each other, but we are also very strong-minded in our opinion.”

Aside from being a pop icon, Mel B is a mother and loves to spend time with her children on the road throughout the auditions across America.

“All my kids get to trash my dressing room,” she says. “They get to watch amazing acts and they get to bug me while I am working. I love it, which is what is so lucky about doing what I do, is that I get to bring my family along with me. Can’t beat it!”

Finally, the former Spice Girl answered the burning question that every fan of the girl group has been dying to know: Is there going to be a reunion?

“We have been friends for 18 years, and nobody thought that we would get back together for the Olympics that we did last year,” she says. “And I think that it is nice not to put it out there, and you just got to wait and see. We are not breaking up anytime soon; it is a lifetime friendship!”

Be sure to catch Mel B and the rest of the judges of America’s Got Talent, premiering tonight at 9/8c on NBC!

Watch our interview with Mel B

More about America’s Got Talent