Three stars of Discovery Channel’s Storm Chasers were among the 13 people killed in the Oklahoma City tornadoes Friday. 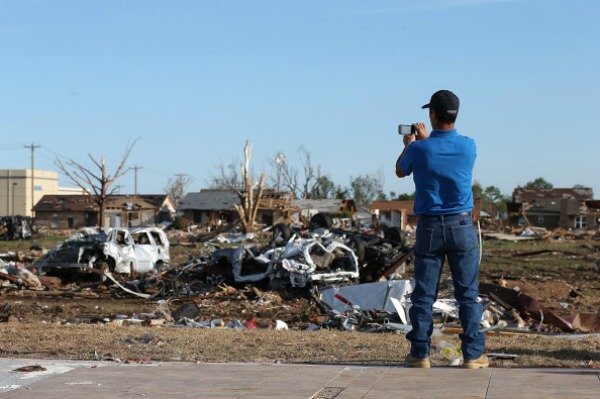 Three professional storm chasers were killed in the tornadoes that tore through the Oklahoma City area Friday. Tim Samaras, 55, founder of the tornado research project TWISTEX; his son Paul, 24; and their chase partner, Carl Young, 45, were among the 13 people who died in the devastating storms.

The three were killed when they were overtaken by a multiple-vortex tornado that sharply changed direction near El Reno, Okla. The news was first reported by The Weather Channel, and TWISTEX confirmed the news Sunday with the following statement by meteorologist Tony Laubach:

“This is a devastating loss to the meteorological, research and storm chasing communities. There is some comfort in knowing these men passed on doing what they loved.”

The details of the men’s deaths show just how violent tornadoes are. NBC News spoke to Canadian County Undersheriff Chris West, who said that the men were in a small Chevrolet that was found upright in a ditch about a mile from Interstate 40 southeast of El Reno. Deputies reportedly said that the vehicle looked as if it had been put through a trash compactor. One body was found a quarter-mile away, a second was found a quarter-mile away in the opposite direction and the third was found inside the car. The engine of the car was thrown a half-mile away and the front wheels were ripped off.

The Samarases had been seen often on the Discovery Channel series Storm Chasers and were frequent contributors to The Weather Channel but weren’t working for either channel when they were killed. They were prominent members of an odd, close-knit community of meteorologists and storm chasers who race to the locations of major tornadoes hoping to gather scientific data and record the massive funnel clouds on film and video.

The Hollywood version of the people in the storm-chasing community was seen in 1996’s Twister. Though the film may have portrayed chasers as cowboys, their colleagues report that the Samarases were serious researchers.

“[Tim Samaras] was a pioneer in terms of making surface measurements inside of tornadoes. He was always at the forefront of tornado measurements,” The Weather Channel’s severe weather expert, Greg Forbes, told CNN.

Tornadoes have been in the news a lot recently with the seemingly never-ending devastation that has occurred in the heartland of the U.S. Celebrities like Blake Shelton and Miranda Lambert have headlined shows to help bring in donations for the victims.