One of the cutest couples in Hollywood now have an addition to their family. Jenna gave birth to their new daughter on Thursday in London. 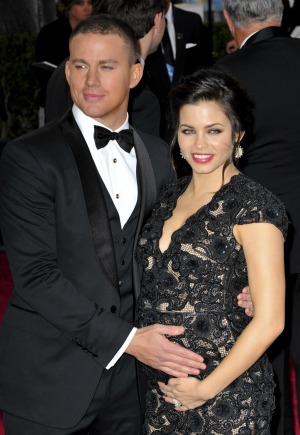 Channing Tatum and his wife Jenna Dewan-Tatum are officially parents! The couple welcomed their new baby on Thursday, May 30, according to Us Weekly. And it’s a girl!

The couple are in England while Tatum works on his current project, and the couple knew the baby would be born in the country. The Tatums met on the set of Step Up and have been married since 2009.

Dewan-Channing spoke with Glamour about what her parenting style might be like. She and her husband have obviously been planning for the baby for a while, but are still wondering what it will be like (in real life).

“Who knows what kind of parents we’ll be? We have two dogs, so we’ve had some practice!” she told the magazine for their May issue. “And as soon as this baby comes into the world, Channing and I will figure it out real fast.

“I think, ‘How in the world am I going to do all this?’ I have no idea what I’m up against. But I’m as mentally prepared as I can be. It’s an adventure!”

Tatum previously spoke with People about this child just being the first step to the big family he hopes they will have someday.

“I’m ready; I think she’s ready,” he told the magazine. “The first number that pops into my head is three, but I just want one to be healthy and then we’ll see where we go after that. It’s really easy for us guys to say, ‘I want, like, 15 kids.’ Jenna will be like, ‘Well, you better get another wife!'”

Tatum is in England working on Jupiter Ascending, but he can also be seen this summer in This Is The End and White House Down. Dewan-Tatum will soon begin work on her new TV series, The Witches of the East End, which will air on Lifetime.

For now, it looks like both parents are just focused on the new addition to their family.

“The baby will get top billing as far as priorities go,” a source told Us Weekly. “Channing is going to be the most adorable hands-on daddy ever and do whatever is necessary to make sure Jenna can balance it all.”