A news organization has obtained graphic images of the crime scene where model Reeva Steenkamp was allegedly killed by Oscar Pistorius, and cops are being eyed as the leak. 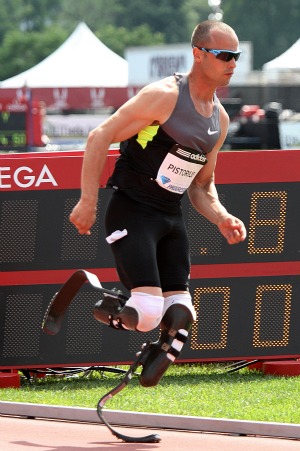 Graphic images of the crime scene where Reeva Steenkamp was killed have left accused killer Oscar Pistorius and his family reeling.

The photos show a large pool of blood on the bathroom floor with drag marks that coincide with the Olympic runner’s story that he pulled the model out to try to revive her after mistaking her for a burglar.

One photo appears to show two police markers indicating bullet holes below the door handle, which some analysts say backs up Pistorius’ claim that he was not wearing his prosthetic legs at the time of the shooting.

That detail is key to the defense of the double amputee. Police allege Pistorius planned the killing, taking the time to put on his prosthetics to stalk Steenkamp through the house.

Sky News, which published the images, did not disclose its source. Police claim they are unaware of “the origin of the photos,” but a source told ABC News that they are cell phone photos from one of the officers at the crime scene.

Needless to say, the Pistorius family is not pleased by the leak.

“We were shaken by the graphic images, leaked into the public domain this week, of the accident scene at Oscar’s house,” the family said in a statement.

“It has always been our plea that the legal process be allowed its run its course with integrity,” they added. “The leaking of evidential material into the public domain, before the court case, does not advance this process.”

The photos also show bloody footprints which could provide key evidence that police contaminated the crime scene. Investigator Hilton Botha admitted his officers walked through the house without wearing protective foot covers. He was later removed from the case after attempted murder charges were brought against him in an unrelated incident.

The Steenkamp family has not commented on the images.