Full disclosure: This Mad Men recap contains spoilers, but it was not written under the influence. 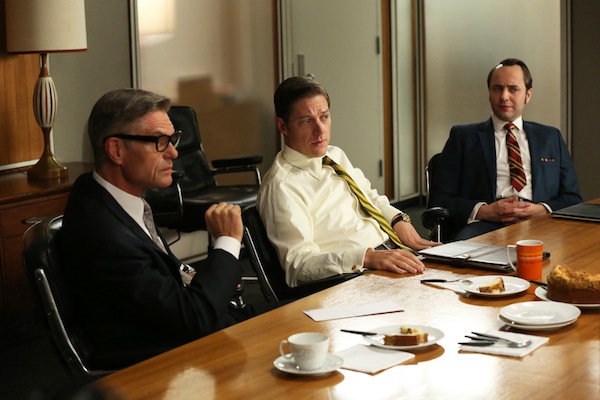 After turning in its most forceful episode in years, Mad Men returned Sunday with 60 minutes that seemed to come straight off Ken Kesey’s typewriter.

Kesey, a 1960s counterculture crusader, once wrote, “If you get high, you might see the falsity of the fabric of the society we live in.”

His philosophy is deeply intertwined in Sunday’s Mad Men episode.

“A Tale of Two Cities” is a whiplash, psychedelic trip that begins with a charming little scene between Don (Jon Hamm) and Megan. Things seem to be back to normal in the Draper household, but the relationship is put to the test when Don heads to California on a business trip with Sterling and Harry.

After the meeting wraps up, Harry takes his elders to a party somewhere in the Hollywood Hills. Don and Roger are fish out of water. Their Brooks Brothers suits are a stark contrast to the free-flowing garb donned by the drug-loving west coasters. 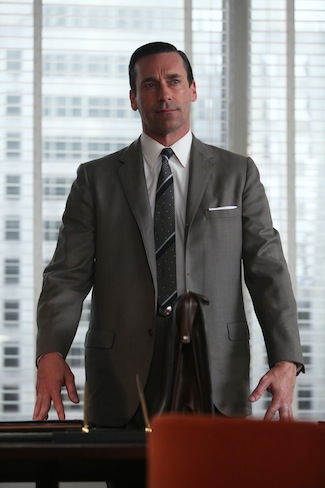 Don and Sterling are impressed by the scenery, but it’s a diminutive male partygoer who captures their attention. Danny, a one-time office copy writer, is — much to Don and Sterling’s surprise — a big-time movie producer who embraces counterculture like Sterling embraces younger women.

It’s a bizarre, but nifty, plot twist that sets the stage for one of the all-time great Sterling moments. After a barrage of hilarious insults aimed at Danny’s Lilliputian height, Sterling is brought to his knees by a right hook below the belt.

Luckily, Roger recovers in time to save Don from drowning after Draper takes an Alice in Wonderland–like trip through a hashish-induced rabbit hole.

Don’s hallucinogenic brush with death is the climax of the first tale of one city. He only sees the Keseyian truth — that he is closer to death than he wants to believe — when he’s high.

While Don and Roger may sit high atop their Manhattan advertising empire, in the eyes of the counterculture, they’re dinosaurs on the verge of extinction. When Roger pontificates on the plane about New York’s superiority, he’s really talking about his way of life in comparison to the hard-charging hippy movement.

Back at the office, the second tale of the second city plays out in a brilliant sequence of office drama. Cohesion is still lacking, and the board argues over the alphabet soup controversy of S.D.C.P.C… whatever the heck the name should be. Ginsberg, conflicted with his personal politics, lashes out at Cutler and calls him a fascist. Cutler then screams at Bob and tells him to go back upstairs.

But all that pales in comparison to the storm brewing between Pete (Vincent Kartheiser) and Joan (Christina Hendricks).

Thanks to a friendly connection, Joan meets, casually, with an Avon Products bigwig. Joan thinks she’s being set up on a date, but the rendezvous turns into business when the Avon guy seems more interested in Joan’s advertising opinions than her bust. 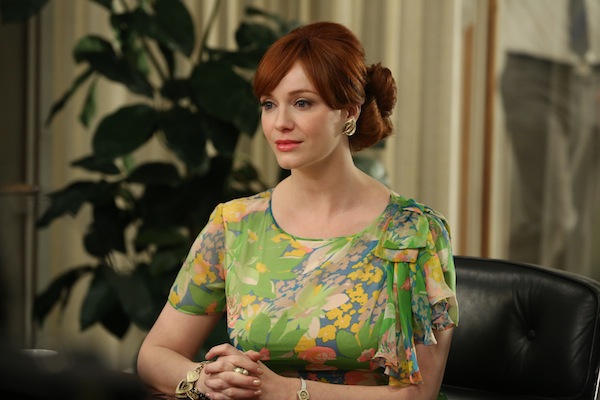 Joan tries to keep the meeting on the sly but turns to Peggy (Elisabeth Moss) for advice. Together they go to Ted, who insists that Pete should handle the potential account. Joan sees the writing on the wall (caught brilliantly by the look exchanged between Joan and a secretary), so she sets in motion an audacious plan to squeeze Pete out of the equation.

Joan and Peggy take a promising second meeting with the Avon guy, but they return to office on shaky ground. Pete eventually finds out and throws the usual Campbell tantrum. It looks like Joan may be facing severe consequences, but Peggy saves the day with a phony phone message from Avon.

It’s a major victory for Joan, whose slow climb continues to gain momentum.

As for Pete, well, he’s fresh out of tantrums. So instead he bums a joint off a co-worker and lets out a huge breath of marijuana truth.

Pete’s eyes, like those of many of the Mad Men characters, are opening wider and wider with every episode.

Did we miss anything? If so, let us know!