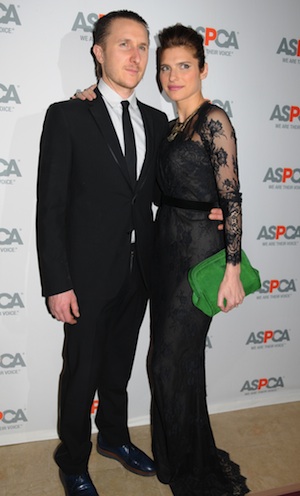 Independent-film actress Lake Bell married artist Scott Campbell on Saturday in New Orleans. Bell, who is perhaps best known for her leading role in HBO‘s How to Make It in America, wore a custom-designed Marchesa wedding dress, while Campbell opted for a Marc Jacobs tuxedo.

People magazine reports that several A-list stars were in attendance at the nondenominational ceremony at exquisitely rustic Marigny Opera House.

Us Weekly says its inside source reports that Lake Bell went high-fashion with her custom Marchesa wedding gown.

“Lake wore a white tiered dress, sleeveless with a high beaded neck and a V-cut back. She was wearing a veil and carrying a crimson red rose bouquet.”

Several celebrities watched the indie couple tie the knot, including Cameron Diaz, Jennifer Aniston, Alicia Silverstone, Eva Longoria, and Kate Bosworth. After the lovely couple exchanged vows, Lake and Scott hopped on a waiting motorcycle in a true mixture of glamour and fun.

Lake Bell rose to fame when she was cast in Mark Wahlberg‘s latest HBO venture, How to Make It in America. The show follows two aspiring New York fashion designers as they attempt to build their brand in New York City.

HBO teaches us how to Make It in America >>

Bell met Campbell in 2011 while filming the show — Campbell even appeared on the show as himself. The two became engaged in March 2012.

Lake Bell is set to star in the upcoming psychological thriller Black Rock, along with Kate Bosworth. Bell plays one of three girlfriends who return to their old childhood getaway on a deserted island in the Pacific Northwest but soon discover they are not alone.

Bell is fast becoming a fashion trendsetter from her coveted hairstyles to her little black dresses.

Congratulations to Lake Bell on her recent wedding!