Army Wives picks back up on Sunday, and, with only one episode left before the Season 7 finale, it’s probably a good idea to keep the tissues on standby. We caught up with Catherine Bell about mustering up difficult emotions, her OMG moment meeting Brooke Shields and what the future holds for Catherine and her character. 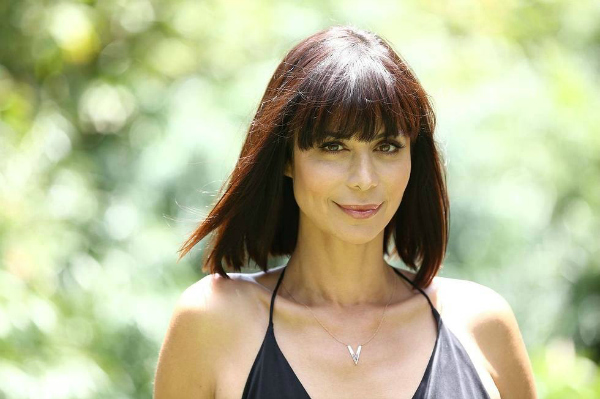 SheKnows: Jumping right in, can you talk a bit about how your character, Denise Sherwood, has been adjusting to life without Claudia Joy?

Catherine Bell: For Denise, it was certainly rough. Losing her best friend was just brutal — like, I can’t cry anymore! (laughs) So she actually became the strong one. I think she was the one that was the strength for everyone involved. They are strong women, Army wives. They deal with a lot, handle a lot, hold down the fort, handle loss and help others through it… they’re pretty incredible people.

SK: So true! Will physical and psychological issues from last season come back and haunt Denise in the future?

CB: Oh yeah, for sure. I love that our writers definitely bring it back. There are moments where she’s angry and upset and loses it with a woman who has diabetes and isn’t taking care of herself — and, of course, Claudia Joy died because of diabetes. So she loses it at this woman and is like, “What are you doing? My best friend died, and you’re not even caring about your life!” There’s just so much emotion and so many phases people go through after loss, so it does come back. It doesn’t go away… ever, I don’t think.

SK: Being a military wife is certainly difficult and takes a special breed of relationship — what kind of feedback have you heard about Denise and Frank patching things up?

CB: Yes! Well, you know, fans seem to love our relationship. The first season, I think he was a bit tough and more of a hard a**, and then he warmed up through all the stuff they went through with their son and coming back together in their relationship. So, I think people love just that long-term care and love they can have for each other. He’s really sweet to her, and now they just adore each other.

SK: At first, Frank struggled with Denise going back to work. Have you enjoyed her evolution into a more independent person?

CB: Completely! When I first signed on to do the show, I wanted to make sure she wasn’t just going to be this woman living in the shadow of her husband forever, and that was really assured to me when — even in the first season — she went through quite a transformation, and it’s just continued on. 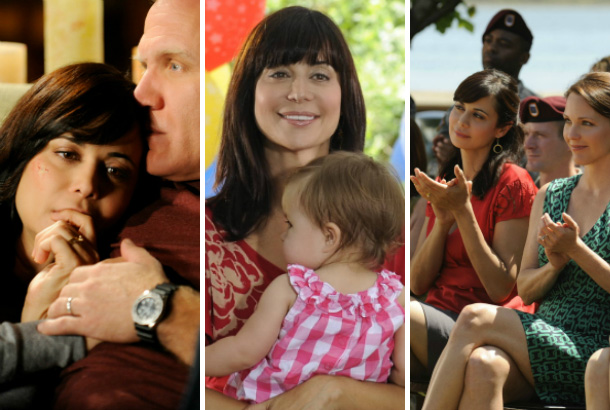 SK: Jeremy’s storyline throughout the show has been a tough one, but it’s certainly evidence that a mother’s love is unconditional. How did you get into the right headspace to deal with his death?

CB: Oh, my God… I had just had a baby — my son — when that happened, so it was like the emotion was just right there every time I had to say, “My son….” So somehow it was just really easy in a way. The entire cast, we just bawled nonstop for, like, four or five weeks. Richard Bryant, who actually played my son, is such a sweetheart, and just to see him go was so sad, you know? The whole combination and the writing — it really was probably some of the hardest work I’ve ever done in terms of exhausting emotion! But, at the same time, it was probably the easiest to reach that emotion. I didn’t have to dig real deep.

SK: From the onset, the show has been pretty progressive in that it tackles so many different issues of war. How do you feel the public response to that has been?

CB: Well, in terms of the actual war, we kind of stay neutral on that — whether it’s Afghanistan or the politics of the war or why we’re there or any of that — which I think is great, because the show isn’t about that. It’s really about the families. No matter what the soldiers are doing, it’s just about the life at home really and how we’re coping, so I think the audience responds to that. And it may be why we have a broader audience than just military families, because they’re topics of life and love and friendship and family and loss, and all of those things that are pretty universal.

SK: One of our writers recently wrote an article exploring the correlation between multiple deployments and the alarming rate of soldier suicides and wondered whether the show will deal with this issue more. Do you think it might be addressed?

CB: Hmm, I don’t know! We certainly have touched on that. I don’t know if we’ll do much of it again, but certainly the emotional trauma that comes with, unfortunately, being involved in a war and killing and seeing people be killed — we definitely deal with that with a lot of different characters. One of the characters in an upcoming episode really has trouble dealing with it. It’s his first deployment and his buddy dies, and… actually, yeah! We do kind of touch on that whole subject again.

SK: Earlier, you mentioned all the new characters — including Brooke Shields! Um, love her! How is she to work with?

CB: Oh my God, me too! I was like, “Ahhh, it’s Brooke Shields! I grew up on Jordache jeans and her movies and all that. And she’s great! She’s just a cool chick — she’s really down-to-earth and fun. She can just hang with anybody. She fit right in… we really enjoyed having her. 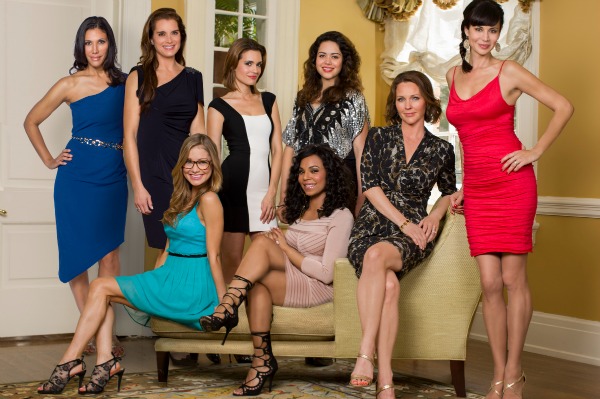 SK: Totally selfish question — give us your workout regimen, please! You look amazing!

CB: Aw, thank you! I try to do something at least a couple days a week, even when I was commuting to Charleston this last season — Los Angeles to Charleston every five to eight days, pretty much. So that was tough, but I would try at a minimum to do something twice a week… whether it was Pilates or a hike or working out with a trainer or the Bar Method. Anything like that just to kind of keep my body from turning to mush! (laughs)

SK: Speaking of Charleston, I’m a Charleston girl so I’ve gotta know: What was your favorite thing about being in the Holy City?

CB: Oh, my! Just being able to live in the city — it was amazing! I lived in several areas, from Isle of Palms to Downtown to Mt. Pleasant. I really just loved it! I had never been there before, and the people and the beauty and the history and the beaches and the hospitality… I really, really love that city.

SK: Well, as we know, there’s never a dull moment on Army Wives. Any hints about Denise’s future?

CB: It’s hard to say anything without giving too much away! There’s a death, there’s a near-death, there’s a relationship breaking up, another one getting together… (laughs) You just have to watch!

SK: My friend Whitney, who has been a huge fan since your JAG days, is dying to know: Would you consider following in your former costar John M. Jackson’s footsteps and appearing on NCIS?

CB: You know what is funny? I’d been talking to one of my friends, who is a producer at NCIS, about having a guest-starring role. And I wasn’t available, but we’ve definitely been talking about the idea. At first they were like, “Oh, we’re not sure we want to cross the two shows,” and then it became like, “Oh, let’s do it!”

CB: I might have started the idea, and then John [Jackson] ended up doing it. So maybe there will be room for it next season! I would love that — it would be so much fun to put on that uniform again.

Watch Army Wives Sundays at 9/8c on Lifetime. Missed a week? Catch up on episodes at Lifetime.com.