When a show airs its finale, you expect more than a few surprises. We’re guessing that nobody was 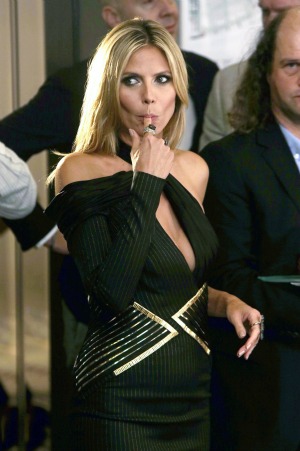 expecting the kind of surprise that showed up on the May 30 season finale of Germany’s Next Top Model, especially not host Heidi Klum. Before contestant Lovelyn Enebechi could be named the winner of the competition (beating out runner-up Maike van Grieken), two topless protestors jumped on stage and ambushed Klum.

The ladies appeared on the stage had written the words “Heidi Horror Picture Show” across their bare chests. The women were reportedly from the Ukraine-based feminist group Femen, known for targeting fashion shows in the past. Security guards jumped in and removed the ladies, and Klum reportedly seemed unfazed throughout the whole thing. After all, being a model, it’s not like Klum’s never seen another lady’s bare bosom before. Though we kind of doubt she’s seen any ladies with her name written across their chest.

Us Magazine reports that Klum’s reaction to the incident was cut out of the live broadcast, but she apparently told the crowd, “I have just been seeing boobies in front of me. Too bad it happened at this special moment!”

Klum has chosen not to address the incident any further on social media and has instead been tweeting everything from pictures of her parents to Korean singer Psy and Robin Thicke.

Klum also posted a picture of herself on a plane with Bruno Mars, writing, “Thank you for a great performance on my show last night in Germany. You are a really cool dude!” in the picture’s caption.

Talk about a lady who knows how to keep her cool in unusual circumstances.

Melissa Meister: What it’s really like being Pregnant & Dating
INTERVIEW: MasterChef‘s Graham Elliot dishes on Week 2
5 Things Castiel could do in Supernatural Season 9