Bon Jovi has a very special gift for some lucky fans — and it’s great PR for a band that’s in the middle of some very serious problems. 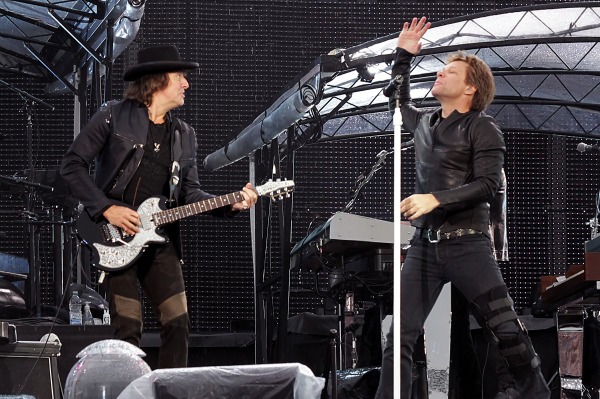 Bon Jovi has dropped their appearance fee for a Madrid concert in a bid to lower ticket costs for fans in the midst of Spain’s major economic crisis.

Because the band waived their fee, ticket prices have been halved and are now going for between 18-39 euros, or starting at just $23, and cover just the costs of staging the concert, including the wages of local workers.

“I didn’t want to let fans down,” explained frontman Jon Bon Jovi. “We did a study and we saw that due to the economic situation Spain wasn’t going to be on the road map. But I didn’t want to leave out fans from a country I love that has treated me well for 30 years.”

The June 27 concert is sold out, so fans don’t seem to mind that original guitarist Richie Sambora will be missing from the lineup amid mysterious strife hinted at by Bon Jovi to be a relapse of substance abuse resulting in Sambora quitting the band.

“Life goes on, so if someone chooses not to be here… unlike if this were, God forbid, The Edge, and he for some reason couldn’t make a U2 show, [then] it would be very difficult to just step in,” the singer told the Evening Standard.

“You have a choice — you either figure it out, go and grow, not only survive but thrive. Or, you say, ‘I hate my brother and I’m gonna quit the band.'”

Music review: Bon Jovi “Because We Can” >>

“I don’t have any major problems in life right now, I love my fans and I feel bad for them at the moment. Bottom line,” he told MailOnline.

“My opinion is Jon wants to see if he can pull off stadiums by himself. He is making it very difficult for me to come back. Enough with the trash-talking!”

Regardless of the reasons, the question on every fan’s mind is will Sambora be back?

“I would love to be in London for the Hyde Park Bon Jovi show on July 5th,” he said. “Let’s see what happens.”

Catch up on all the latest celebrity feuds — subscribe to the SheKnows Entertainment newsletter! >>