Just when you think she couldn’t get any crazier, Ke$ha releases a new video to prove you wrong. 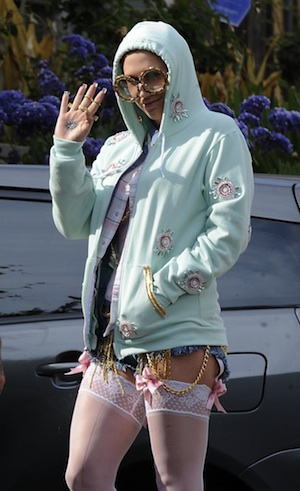 One thing you can say for Ke$ha — she’s always entertaining. The 26-year-old pop singer has just released the video for her new single, “Crazy Kids.”

The third single off Ke$ha’s 2012 album Warrior, “Crazy Kids” features the ubiquitous will.i.am on a verse.

But it’s the video, not the song, that will leave people talking.

We first see Ke$ha as what only can be described as a hot mess, walking down a Los Angeles street covered up with a seafoam green hoodie and huge gold glasses. But it’s not until we get in the house that we get to see her in all of her craziness.

The hoodie reveals Ke$ha all decked out in a gold grill, cornrows and the always-classy cutoff daisy dukes with white thigh-highs and garters. Singing and saying hi to her friends, Ke$ha prances through the house on her way to grab a 40 from the conveniently stocked refrigerator.

After Ke$ha poses on a couch with two very friendly-looking Pit Bulls, one of the pups runs off to go find will.i.am

Evidently, there were some scheduling problems when shooting this video so Will only shows up as a hologram on a gold-chain-wearing, gold-suited space man.

Will.i.am as the MTV Music Awards moon man strolls throughout the house rapping about big breasts before we go out back where Ke$ha has assembled some of her best friends for a pool party.

And by best friends, we clearly mean the homeless dude from the corner, various members of the local biker gang and a few people she found while traipsing down the aisles of WalMart at 2 a.m. on a Wednesday.

Wait! Ke$ha had sex with what?

But when you’re Ke$ha, you just throw on your black leather bathing suit adorned with enough chains to sink a ship and, as she sings, “keep on dancin’ until the dawn.”

Because for Ke$ha, the party never ends.

Watch Ke$ha’s new video for “Crazy Kids” and let us know what you think in the comments below.