Khloé Kardashian Odom reveals that Kim Kardashian’s baby was shy about revealing its sex to the family.

Fans of E!’s Keeping Up With the Kardashians have been waiting a long time to find out if Kim Kardashian is 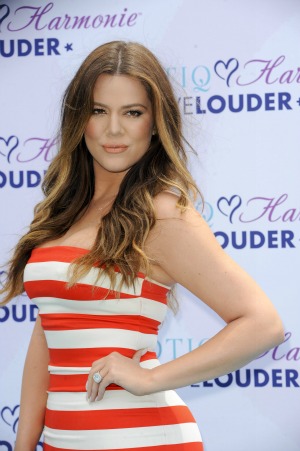 having a boy or a girl with boyfriend Kanye West in July. The baby’s sex will be revealed in the show’s Season 8 premiere and, according to Khloé Kardashian, Kim’s little one didn’t want to give that secret up easily.

The youngest Kardashian sister dropped by the Today show on Wednesday to chat about the new baby’s game of hide-and-seek with hosts Hoda Kotb and Kathie Lee Gifford, Us Weekly reports.

“It was crazy because we went to three different doctor’s appointments and the baby kept sitting, like, Indian-style,” Khloé said. “We couldn’t tell the sex. It was so frustrating, so we were so happy to finally find out.”

Fans will find out the sex of the baby during the eighth season premiere of Keeping Up With the Kardashians, which airs on Sunday, June 2. Tune in then to find out if Kim and boyfriend West are having a little boy or a little girl.

Getting hitched? Book Omarosa or one of these holy celebs >>

If you check out promos for the premiere, you’ll see Kim, Khloé, and mom Kris Jenner at the doctor’s office together, anxiously awaiting word from the ultrasound tech. But West is nowhere to be found. Does that mean something is up between the couple? Khloé says fans shouldn’t read into his absence and that things were “great” between the two.

“He was at all the previous [appointments] where we never could find out the sex of the baby,” Khloé said. “So that was just the one he wasn’t at. But we were videotaping it on our iPhones and everything. I think he had a concert.”

Are you excited to find out if Kim Kardashian and Kanye West are having a boy or a girl? Will you be tuning in to the big reveal during the Season 8 premiere? Share in the comments below!