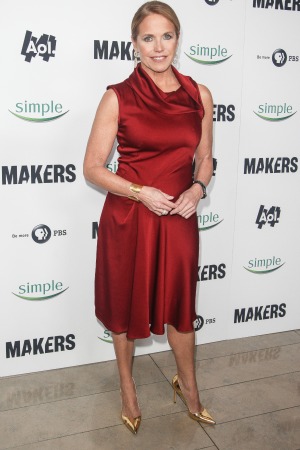 Who knew Katie Couric had such a colorful dating life? We already knew about her date with Larry King and his attempt to one-night-stand her, but did you know about Jeff Probst, Bob Saget, and Michael Jackson?

On Wednesday’s Howard Stern Show on SiriusXM, the newswoman revealed some recognizable names and dished on their night out together.

Couric shared that Saget, “was fun, he was really fun. I had fun, I don’t think I did it for him.”

Even with all of that fun, the actor never called her again for a date.

As for her evening with Survivor host Probst, it sounds like his choice of accessories turned Couric off.

She told Stern, “I think he had puka shells on — that was kind of a weird thing.”

He also failed to ask the talk show host out again.

However, Couric handled the rejection pretty well even though the shock jock was baffled by their disinterest in the pretty journalist.

She said, “I can’t say that I was devastated that neither called me back. I thought they were both nice guys . . . I don’t think there was real magic there with either [of them], but I enjoyed spending time with them.”

The final suitor might be the most shocking of all, Michael Jackson. While the date never happened, the King of Pop asked his spiritual adviser Rabbi Shmuley Boteach to act as his wingman and fix him up with the former Today Show host.

According to Couric, the rabbi called her asking about her dating status since Jackson told him, “That’s the kind of girl I would like to go out with…”

She handled the awkward situation well and turned down the date, but Couric does have a few regrets.

The daytime host said, “Not to be too psychoanalytical about it, but I think he was looking for a little normalcy possibly, and maybe he saw me as kind of a normal person. I do regret not having dinner with him. That would have been insane — breaking bread with Michael Jackson!”

35 mins ago
by Alyssa K. Davis