With the CMT Music Awards quickly approaching, we look at the country music vixens that we’d most like to be. 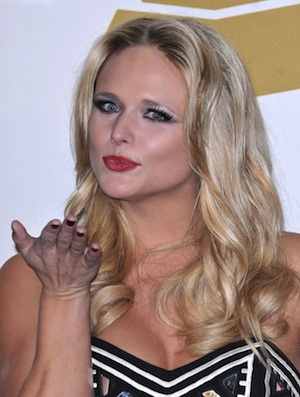 The CMT Music Awards are coming up, and to tell you the truth, I’ve been a bit jealous of some of the female nominees.

Have you seen these videos lately? They all have really hot boyfriends, always have perfect makeup, and the right amount of wind in their hair.

Plus, in the event of a heartache, they can take revenge out on any man without fear of being arrested or breaking a nail.

OK, we know that’s not how they really are in real life, but how awesome would it be if one day we woke up and we were just like one of those cool country music vixens like we see in the videos?

So check out these country music vixens we’d most like to be.

Carrie Underwood has had such a charmed life. She won American Idol in 2005 and has become one of the top-selling female artists ever.

It would be so awesome to be Carrie Underwood.

She is a total girl next door one minute and then the next minute, she hits the red carpet and is stunning. I bet she wakes up looking beautiful and flawless.

That’s not to say she doesn’t have her fair share of heartache. Only, when someone breaks Carrie’s heart, she takes revenge.

Sometimes she takes revenge on the “pretty little souped-up 4-wheel drive” of her cheating boyfriend. And sometimes — like in the video for “Two Black Cadillacs” — she runs the car right into the guy.

So I guess you could say that Carrie Underwood is like the Desperate Housewife of country music. Count me in.

Is there a Carrie Underwood/Taylor Swift feud brewing? >>

You just know that Taylor Swift would have been that girl in high school who sat on the benches at lunch writing terrible poems and professing her love for the school’s lacrosse star, even though he won’t give her the time of day.

Instead, Taylor spent her teenage years on top of the charts writing songs about all of the boys she’s dated and yes, the ones who wouldn’t give her the time of day — we’re talking about you Stephen Liles of Love and Theft.

I mean, think about it. How great would it be to be Taylor Swift? It actually sounds like a lot of fun. And I’ll go out on a date with Jake Gyllenhaal any time.

The best part is that you could date anyone you want and then when you inevitably break up — because you always break up — you get the last word by writing a song and telling the world about your relationship.

Gyllenhaal got “We Are Never Ever Getting Back Together.”

Taylor Lautner got “Back to December.”

And One Direction’s Harry Styles got “Trouble.”

How Taylor Swift turns a breakup into a chart topper >>

In my head, country newcomer and CMT Music Awards nominee Jana Kramer spends her days in a flowy dress picking sunflowers. Then she rides her vintage beach cruiser from the meadow up a charming, tree-lined dirt road to her country cottage perfectly decorated in a combination of Pottery Barn catalog meets yard sale chic.

She proceeds to make a pot roast and bake two pies — one to give to her elderly neighbor — and then sits on her front porch swing sipping sweet tea and planning her wedding until fiancée Brantley Gilbert gets home.

Wait, that’s just in my head? Well it seems to me that Jana Kramer is the perfect amount of country to make you want to give it all up and move to a Pottery Barn.

Oh, to be young and fresh-faced again. I want to be Jana Kramer.

Check out our wedding playlist for the country couple >>

Miranda Lambert is the bad girl you just want to be but can’t. She doesn’t go to the grocery store, pay bills on time, or drive a minivan. She smokes, does shots of tequila without the lime, and on her forearm is a tattoo of two intertwined handguns with angel wings.

And after a hard day of breaking the law and burning down houses, she gets to come home to a nice warm fire and drink hot cocoa in a red swivel chair with none other than Blake Shelton — who is adorable.

It would be so cool to be Miranda Lambert.

Chris Brown better stay away from Miranda and her gun >>

So which country music vixen would you like to be? Let us know in the comments below.