Man of Steel star Henry Cavill isn’t perfect. It might be hard to believe, but the British hunk used to be overweight. The actor recently discussed his past battle with the bulge. 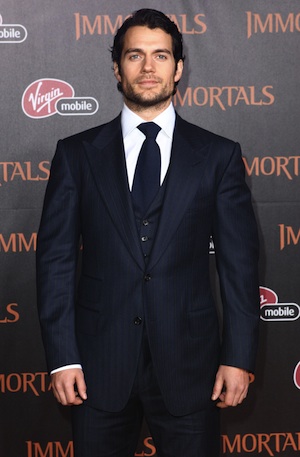 Don’t let the chiseled jaw and steely eyes fool you — Henry Cavill‘s just like the rest of us. The actor didn’t always look like a Greek god, or in his case, Superman. The Man of Steel star graces the latest issue of Details, where he discusses his awkward adolescence.

Henry Cavill reveals the secret to his superhero physique >>

Cavill blatantly says, “I was fat. I was Fat Cavill.” It was a nickname he earned from his boarding school peers. Unfortunately, his weight wasn’t the only thing that made him an easy target.

He was also extremely homesick. “I bawled on the phone to my mom four times a day,” he says. Doesn’t this make you want to go back in time and give him a hug?

Once acting came into play, the young actor decided to slim down. “I lost one and a half stone” — 21 pounds — “and I wasn’t Fat Cavill anymore.”

Oddly enough, his childhood taunts came in handy. Cavill used his experience as fuel for his performance in Man of Steel. “My version of Superman,” he says, “is essentially of a guy who has spent his whole life alone.”

To play the superhero, Cavill was forced to put on weight (i.e. muscle). The actor scarfed down 5,000 calories a day. His extreme diet plus his Tabata workout completely transformed his body.

These days Cavill’s back on the slender side but won’t reveal any numbers.

“I will say I was a lot bigger as Superman,” he says. “A lot bigger. I’m not saying how much. It’s modesty about the weight — I’ve always been worried about my weight — but I also don’t want to invite that debate: Henry weighs this, so he’s the perfect Superman. Or, Henry doesn’t weigh this, and therefore he’s not believable in the role.”

With or without the cape, he still looks great.