David and Victoria Beckham’s family hung out with good buddy Tom Cruise, along with his son Connor, at an L.A. Kings game on Tuesday night. Fun was had by all. 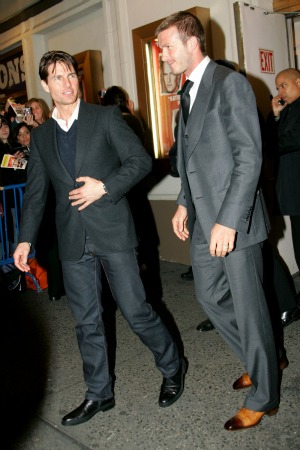 and last night they all got together for family fun at an L.A. Kings game. Cruise and his son Connor attended the game in nearly matching leather jackets for their father-son outing. The Beckhams brought their entire brood of kids with them for the game, including Romeo, Cruz, Brooklyn and little Harper, the youngest member of the Beckham clan.

In fact, it was Harper and her dad who got the most attention out of the group when the Kings’ famous “kiss cam” found them in the audience. Beckham happened to be holding Harper (who was dancing happily to the music in her daddy’s arms) when the camera discovered the pair. Quickly pointing out to Harper that they were on the big screen, Beckham plated a kiss on his little girl’s cheek which we’re guessing melted more than a few hearts. You can’t see the rest of the group in the video, but photos taken at the moment show Cruise and his son enjoying the moment along with the rest of the Beckham family.

Check out the adorable moment on the kiss cam video. There are plenty of other kissers in the video, but Beckham and Harper’s moment shows up around the 1:20 mark.

The family outing at the hockey game comes just weeks after Beckham announced he was retiring from soccer after playing the game for over 20 years. It looks like he’s making the most of his retirement by spending as much time as possible with his family and friends, which seems like a pretty awesome plan.