Jennifer Lopez receives both praise and anger for her sexy performance on Britain’s Got Talent Tuesday night. Did the singer go too far? 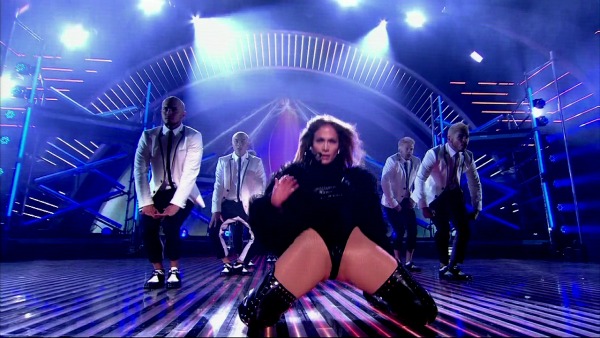 Jennifer Lopez performed her new single “Live it Up” on Britain’s Got Talent on Tuesday night and it looks like not everyone was happy with the show. The singer hit the stage in all-black outfit consisting of a skin-tight leotard with big, fluffy long sleeves and thigh-high black boots. The funny thing is, with all the controversy surrounding the costume, Lopez was about as covered up as someone can get. Only a few inches of her legs were showing, and even the leotard itself appeared to be a turtleneck.

But when you’ve got a body like Lopez and you use it the way she does, you could probably go onstage wrapped in a blanket and come off as overly sexy. And that’s exactly what many British viewers are saying: that Lopez’s outfit and dancing was way too much for a family show. The Hollywood Reporter reports that Ofcom, the government-affiliated Office of Communications that regulates broadcasting in the United Kingdom, apparently got a whole bunch of complaints from viewers after the performance aired. A spokesperson for the office said, “Ofcom can confirm that it has received complaints about the Britain’s Got Talent broadcast last night, which we are assessing but not currently investigating.”

Despite what some of the viewers said about Lopez’s performance, judge Simon Cowell had an entirely different opinion. Cowell tweeted that he thought Lopez was “incredible” on the show and “a total superstar.”

We have to admit, after hearing about all the hoopla we were expecting something pretty raunchy when we went to watch Lopez’s performance. But overall, we really didn’t think it was that bad.

Lopez said recently that she’s open to returning to American Idol, but it would depend on her schedule. It makes us wonder if Lopez had done the same performance on Idol, would the U.S. audience have reacted in the same way and if they hadn’t, would that be a good or a bad thing?