Are they or aren’t they? The tabloids have been waiting for the breakup for months, but is this finally the end for Miley Cyrus and Liam Hemsworth? 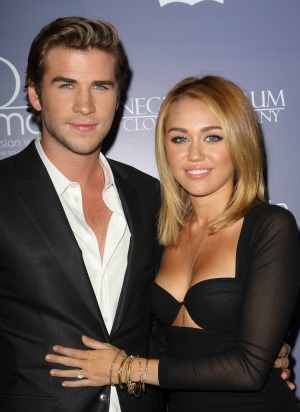 After months of speculation over whether Miley Cyrus and fiancé Liam Hemsworth have broken up, we may finally have the answer.

Us Weekly is reporting that “multiple sources” have told them The Hunger Games actor and Cyrus have officially called off their engagement.

“They are definitely over,” one of the sources reportedly told the magazine.

Cyrus and Hemsworth met on the set of The Last Song in 2009 and were engaged three years later. They have not been in any rush to plan their wedding though.

“The split comes after months of back and forth between the two, including a recent public display of affection at a party at the ‘Can’t Be Tamed’ singer’s L.A. home,” Us Weekly said. “Prior to that, the couple of nearly four years took some time apart and put their wedding plans on hold while Hemsworth regrouped in his native Australia.”

The magazine adds that friends say Cyrus’ “childish rebellion” is what tore them apart, as well as the fact that they are apart so much of the time.

Hemsworth’s family reportedly has been hoping he would end the relationship. Us Weekly reported that, back in April, his brothers Chris and Luke “staged in intervention” to end the engagement.

“They want him to end the romance for good,” a source told the magazine at the time.

But breakup rumors have followed the couple since before their engagement, so is this just another story?

“Every week it’s, ‘Are they broken up? Because we don’t see a photo of them,'” Cyrus told V Magazine earlier this month. “I don’t have time to go to Starbucks with my boyfriend every morning. I wish I did, but I don’t. I’d rather chill at my house and be there for the time I actually get to spend with him.”

Miley Cyrus’ engagement ring is back on her finger >>

Meanwhile, both Cyrus and Hemsworth are staying quiet about the state of their relationship. Cyrus’ Twitter page is covered with news of her new single, “Can’t Stop”, which has been keeping her busy, and will be out June 3.