From Washington lawyer to first lady of the United States to secretary of state. Whoever lands the role of Hillary Rodham Clinton has some big shoes to fill, but a lot of actresses are up for the challenge. 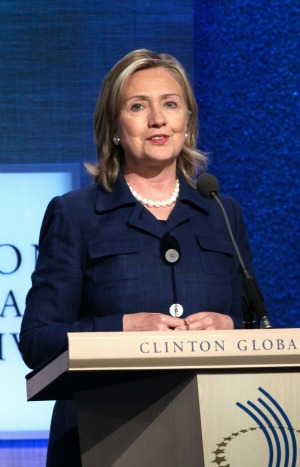 With President Obama‘s second term beginning less than five months ago, it’s hard to believe those in politics are already looking forward to the next election in 2016. But they’re not the only ones.

A new film is set to be released just before that election, and numerous A-list actresses are reportedly hoping to play the main character and namesake.

Rodham is a biopic of former Secretary of State Hillary Rodham Clinton. According to the New York Daily News, the script made Hollywood’s 2012 “Black List,” which is a compilation of the most buzzed-about” projects about to be produced.

The newspaper reports that the actresses vying for the title role include Reese Witherspoon, Scarlett Johansson, Amanda Seyfried and Jessica Chastain.

“They’re all wonderful actresses,” director James Ponsoldt told The Independent. “We’re very fortunate that a lot of really great actors are interested in playing these roles. We’re in an enviable position.”

The film will center around Clinton’s life during her early days as the wife of President Bill Clinton, as well as her life as a 20-something lawyer in Washington.

“Regardless of people’s political affiliation or how they feel about Hillary Clinton, you don’t find people who question the quality of her intelligence or her drive,” Ponsoldt said, according to the NY Daily News. “I want a wonderful actress who could embody that.”

Meanwhile, Clinton is up to some important things these days. Just months after leaving office, she has reportedly decided it’s time to join Twitter. Back in April, her husband joined the site at the urging of Stephen Colbert. And now, according to Politico, she should be joining soon as well.

Bill Clinton has tweeted just a little more than 25 times since joining but already has almost 700,000 followers.

Rodham is expected to be released just before the presidential election in November 2016, though Hillary Clinton has yet to give any hint that she may be running.