Danica Patrick wound up in 29th place at the Coca-Cola 600 race on Sunday thanks to boyfriend Ricky Stenhouse Jr. He caused a collision with her vehicle. 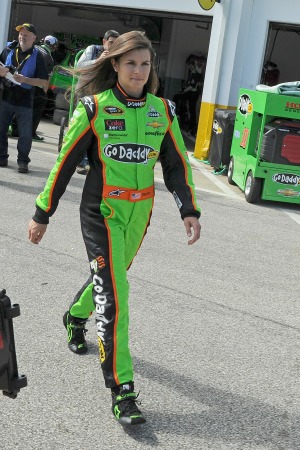 Patrick was on lap 319 of the race when Stenhouse Jr.’s car collided with her vehicle. That momentum forced Patrick to crash into Brad Keselowski’s car before skidding against the wall.

Danica Patrick talks about dominating in a “man’s” sport >>

The collision caused significant damage, leading Patrick and Keselowski to take their cars into the pit for repairs. Stenhouse Jr. was able to finish the race, where he landed in 14th place. Patrick eventually finished in 29th place and Keselowski in 36th place.

Keselowski initially took the blame for the incident, telling reporters, “I was three wide with Danica and didn’t know it and I cut her off and wrecked her and myself. I feel bad for her and I send my apologies to her.”

However, Patrick’s team boss, Tony Stewart, is not too pleased with her boyfriend.

He told SiriusXM Radio after the Charlotte Motor Speedway race, “Ricky Stenhouse, I’d choke him right now if I could get to him.”

The couple knows that all is fair in love and war and it was Stenhouse Jr. who said his race strategy would remain the same even though he is dating a fellow driver.

He told the AP earlier this year, “It won’t affect how I race on the track. I want to go out and win, I race everyone hard.”

The couple officially announced their relationship status in February. Stenhouse Jr. currently ranks 17th in overall standings, while Patrick is further behind at 30th.