One of Beyoncé’s overly zealous fans got a bit too hands-on when he slapped the singer’s behind during a concert on Monday night.

Beyoncé got a little more than she bargained for at a concert on Monday night. The incident took place 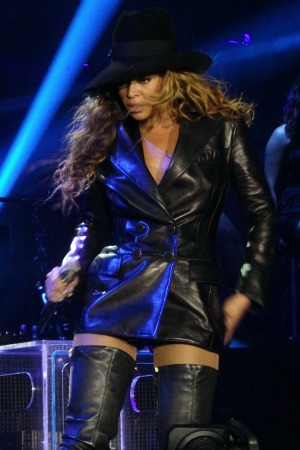 during a part of the singer’s latest stage show where she performs on a second, smaller stage and interacts with her fans.

While singing “Irreplaceable” during her performance on Monday, Beyoncé walked up to the audience and put the microphone out to let her fans join her in the “to the left” line of the song. As she walked away, one fan got a little too excited about being so close to his idol and slapped her booty.

According to some, Beyoncé took the incident very seriously and threatened to have the man removed. But in the video that has now emerged of the event, it’s plain to see that she took the whole thing in jest and was (mostly) joking when she said, “I’ll have you escorted out for that. All right?”

That’s not to say that the man didn’t push things maybe just a tad too far, or that Beyoncé wouldn’t throw someone out of a show if they did something inappropriate. This time though, it looks like it was all done in lighthearted fun and nothing serious came out of the incident.

The singer has been popping up a lot in the news lately. Just last week, her newest single “Grown Woman” was leaked online and fans got to hear the song a bit earlier than Beyoncé might have liked. Plus of course there are have been all kinds of rumors flying that the singer might be pregnant, but seeing as how husband Jay-Z has denied those rumors, we’ll just have to wait and see if it’s true or not.

Pregnant or not, though, once thing’s for sure — Beyoncé is certainly one busy lady these days.

27 mins ago
by Kay Snowden

34 mins ago
by Kay Snowden