Arrested Development has finally returned! We have the rundown on what you can expect, from the highlights to the low points, of the highly anticipated new season! 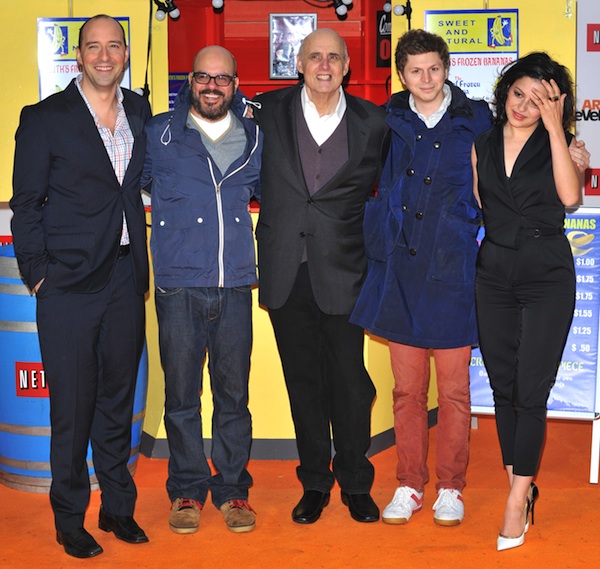 If you are an Arrested Development fan but also managed to have a life this Memorial Day weekend, and didn’t spend all your time watching the just released fourth season on Netflix, then I’m here to give you a heads-up on what to expect!

You may have noticed all the chatter on Facebook and Twitter this weekend, and it’s safe to say that the fan reviews for the new season are mixed. I have a few ideas why that is.

No. 1: Fans are stoked to see their fave characters back on the small screen

It is thoroughly fulfilling to have countless hours of Bluthisms back in our lives! For die-hard fans, there’s nothing better than to see the overtly gay actions of the ever in denial Tobias (David Cross) and the emotionally stunted behavior of Buster (Tony Hale). Or to witness the self-destruction of Lindsay (Portia De Rossi), the shenanigans of Gob (Will Arnett), and the all-around immoral souls who are George (Jeffrey Tambor) and Lucille (Jessica Walter) while Michael (Jason Bateman) drives himself crazy trying to save them all. This is what we’ve been missing for six years!

Will Arnett signs on for Ninja Turtles >>

No. 2: The characters are completely the same, yet uncomfortably different

This one is a bit confusing. The problem is that the characters are exactly the same. They haven’t grown up or changed at all. This leads to an uncomfortable and mildly depressing feeling as the viewer realizes that six years later the Bluth clan is still in over their heads, unsuccessful, and incapable of any deep feelings. They still use and abuse each other. Tobias refuses to give up his acting dreams, Buster seems more childlike than ever, and Gob is still horrendous at magic. The things that once made us love them, now make them all seem extra pathetic. It’s not as funny as it is just sad.

No. 3: It’s kind of depressing

To expand on No. 2, Michael Bluth is by far the most depressing character of the bunch. After six years, Michael might very well be a loser. While he still hasn’t given up hope entirely, he has gone as far as living in a dorm room with his son, George-Michael (Michael Cera) who clearly doesn’t want him there. In a sad and very un-AD scene, Michael is voted out of the dorm. It’s a little dark and not funny at all. Even the great narration doesn’t provide any comic relief. If the viewer hangs in there, the vibe lightens up around Episode 3, but these darker scenes may be what’s causing some backlash from fans.

No. 4: The narration is brilliant

One thing that hasn’t changed and certainly never should is Ron Howard’s brilliant execution as the narrator. His delivery is spot-on and still consists of smart, above average dialogue that really pulls the whole show together. I would dare to say it’s the best part of the whole season.

No. 5: It’s a little confusing

Maybe it’s because they have six years of events to fill us in on, or the way they’ve chosen to tell the story, but at times it’s just confusing. It’s often hard to tell which year they are in or when something happened. If you wait it out, you start to see the pieces come together (much like in previous episodes), but the story and time line seem a bit more convoluted and difficult to follow than in the past.

One of the many things AD always did right was bring in awesome guest stars. This season, they certainly took it up a notch. Not only does Henry Winkler, Liza Minnelli, and Carl Weathers return, but the episodes are filled with comedy A-listers. Kristen Wiig and Seth Rogen play the young George and Lucille Bluth, Ed Helms guest stars as a shady real estate agent, and Isla Fisher lays on the rebellious charm as Michael’s love interest. The guests alone are worth the watch.

Stay up to date on all your fave shows! Subscribe to the SheKnows newsletter today! >>

No. 7: Best dialogue ever

One thing you can’t complain about is how fantastic the dialogue is on this show. Even if viewers don’t feel it’s up to par with previous episodes, it’s still pretty killer. There are puns galore and witty banter that must be witnessed to fully be appreciated. Here are just a few highlights:

Young Lucille: “Cinco de Mayo? She called it that? It’s all a part of the Mexican War on May 5th.”

Ron Howard: “I think it’s a lot more fun if we watch your wife die.”

Gob: “Father, you’ve got to get me a job so I can be prepared… to be president.”

Lindsay: “Lucille 2, you’ve been like a mother to me. Except kind and loving and willing to let me eat.”

There are many pros and cons to this season, but nonetheless it is still clever, quirky, lovable, and entirely unique. You’re just going to have to watch for yourself and let us know what you think!