Now You See Me is all about magicians controlling their audience. But for the actors, it wasn’t that easy. The stars tell SheKnows about their bizarre and sometimes dangerous on-set experiences. 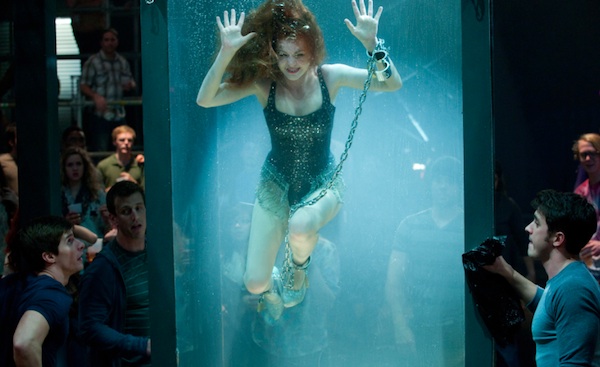 Now You See Me centers on a group of illusionists that use their gifts to thwart greedy businessmen. Their good deeds don’t go unpunished as they’re constantly pursued by the FBI.

The film’s a wild ride that kept the cast on edge in front and behind the camera. Star Isla Fisher even had a near-death experience on set. There’s a scene where her character, Henley Reeves, is submerged in a tank filled with piranhas and things go terribly wrong. Reeves is a talented escape artist, but Fisher, not so much.

Now You See Me stars reveal magic tricks of the trade >>

“I actually thought because my handcuffs were magnetic that if anything went wrong I could just release myself and get to the top,” Fisher reveals. “But on the last day of filming I realized that the chain between my wrists and my ankles were solid. It got stuck underneath one of the slots and I actually got stuck underwater. So here I was screaming for my life. Everybody thought I was just acting.”

What was she thinking during those horrifying moments? “I really just do not want to die in this swimming costume,” she jokes.

Fisher’s costar Mark Ruffalo also had an on-set mishap. Some of the film was shot in New Orleans on Bourbon Street during Mardi Gras. With such an unpredictable environment, something was bound to go wrong.

“You can’t lock off the streets, so it was just anything goes. At one point, after a take, a group of people just grabbed me and started dragging me down the street,” Ruffalo explains. “It was literally like buttons popping off. It was intense.”

Surprisingly, the actor wasn’t traumatized by his semi-kidnapping. He continues, “I thought it was fun.”

While Fisher and Ruffalo discussed their offscreen blunders, actor Dave Franco tried to perform a trick. In Now You See Me, his character Jack Wilder successfully cuts a banana in half with a card. So we found out if he retained any of his card-throwing skills.

Watch the video to see if Franco was up to snuff.


Now You See Me opens in theaters May 31.