Prepare for Jesse Eisenberg and Woody Harrelson to dazzle you with magic. This weekend, they star in Now You See Me, where they prove the hand is quicker than the eye. SheKnows recently tested the duo’s new illusionist skills. 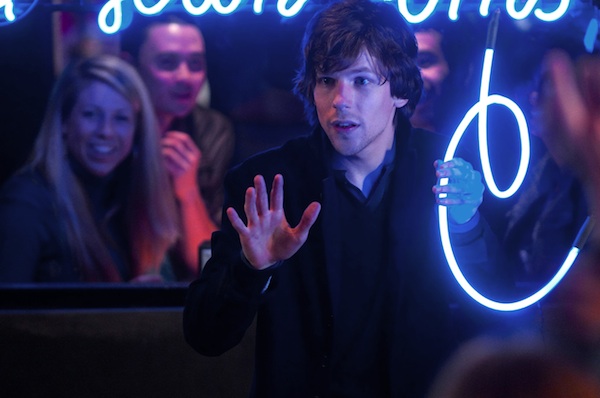 Now You See Me is a combination of Ocean’s Eleven, Robin Hood and magic. The film centers on a group of illusionists called The Four Horsemen, who pull off heists against corrupt business leaders.

Both Jesse Eisenberg and Woody Harrelson star as magicians with very specific skill sets. Eisenberg’s J. Daniel Atlas is great with card tricks, while Harrelson’s Merritt McKinney is an astounding mentalist. The actors studied under the best in the business, but Eisenberg admits he didn’t perform all his tricks.

Now You See Me cast spill behind the scenes blunders >>

“So there’s a scene in the movie where I’m shuffling through cards, while I’m handcuffed in an interrogation room,” he tells SheKnows. “That is pretty much impossible to do unless you’ve practiced for like 25 years. So we had these amazing magicians named the Buck Brothers [Dan and Dave Buck], who are these twin brothers who are the best card shufflers in the world. They did that [scene] and then they superimposed their hands on my body.”

Meanwhile, Harrelson had better luck with his character. He discussed the competitive nature among the group. “I was a part of the Four Horsemen so the four of us would constantly try to do tricks on each other. It went pretty good.”

When asked who the best magician from the cast was, he answered, “Me.” So our SheKnows correspondent put him to the test. See how he fared below.