Since meeting Lauren Parsekian, Breaking Bad’s Aaron Paul has been gushing about the woman he calls his “pretty bird.” The lovey-dovey duo made it official with a Malibu wedding on Sunday, begging the question, “Who is the new Mrs. Paul?” 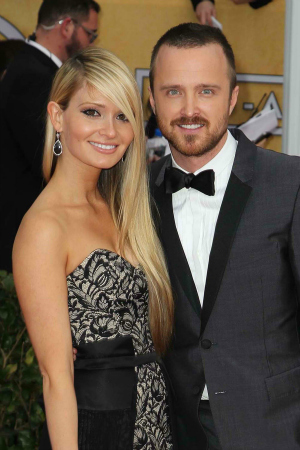 An Orange County native, Lauren is no hair-twirlin’ Laguna Beach cliché. The 25-year-old beauty studied film and television production at the top-tier Pepperdine University in Malibu. Cerebral stats? The cumulative GPA of incoming first-year students ranges from 3.47 to 3.91, and of the 9,222 students who applied for admission last year, only a little more than 3,000 received acceptance letters.

While at Pepperdine, Lauren met Molly Stroud, who joined her in the dream of ending girl-against-girl bullying when the two co-founded the Kind Campaign. Their documentary, Finding Kind, explores the epidemic — which resonates personally for Lauren. “For me, the hardest time was middle school, when a group of my girl friends turned on me. I can still vividly recall every torturous experience they put me throughout 7th and 8th grade,” she explains on the campaign’s website of the bullying that led her to attempt suicide.

She’s got love for indie music

Not only did Aaron and Lauren meet at the Coachella music festival, they realized there was much more to their story when they hit up the festival the following year. “And then, a year later, we fell in love at Coachella,” Aaron told People magazine in an interview. “We ran off together at Coachella. You know, first kiss on the Ferris wheel sort of thing.” Um, could their kismet meeting be any more hipster cool? We can totally see adorable little towheaded tots in their future, rocking Chucks and jamming out to Tame Impala or Nick Cave and the Bad Seeds.

She had an entertainer in the family before Aaron

OK, so Breaking Bad‘s Aaron is — by far — the most notable actor in Lauren’s life, but technically he isn’t the only one. Lauren’s mom, Debra Kelly, landed a few choice (albeit minor) acting roles in the ‘80s, including bit parts in hit sitcoms Charlie’s Angels and CHiPs. Outside of playing a waitress in the 2004 sitcom Married to the Kellys, Debra’s most recent film work was as herself… in Lauren’s documentary.

She’s so not a diva

On Sunday, mere hours before she walked down the aisle looking ethereal, Lauren posted a photo of herself on Instagram getting her hair done. The caption? “Wedding time. Did my own make up! And hair by this babe Michael Kanyon Habib.” No team of stylists on hand for this pretty activist — although we’re positive her doting hubby-to-be offered. The three-minute trailer for Finding Kind, which features Lauren clad mostly in jeans and tees and sporting a ponytail, is also particularly telling of the new Mrs. Paul’s low-key demeanor.