Woah woah woah! She said what? 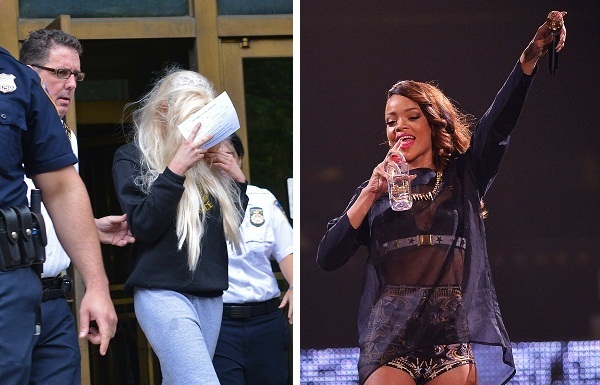 Amanda Bynes just started a one-sided Twitter war with pop star Rihanna! She even went so far as to call the bombshell from Barbados “ugly.”

We’re trying so hard to be supportive of our girl Amanda Bynes. We want to believe her piercing explorations and adventures in wig wearing are just a phase the 27-year-old child star and “retired actress” is going through. She just keeps making things worse, though.

Just some of Amanda’s unusual behavior >>

When Bynes went off on Jenny McCarthy, we were taken aback but couldn’t get too upset. Honestly, McCarthy kind of stuck her nose in Bynes’ business. Bynes’ new attacks seem completely unwarranted, though.

“You look so ugly tryin to be white,” Bynes tweeted. “Chris Brown beat you because you’re not pretty enough.”

Woah. First, it looks like these attacks came out of nowhere. Rihanna’s twitter feed made no mention of Bynes at all. Second, we can all agree that Rihanna is far from ugly. Finally, there is absolutely no excuse (ever!) for a man to hit a woman. For Bynes to say otherwise is unacceptable.

Bynes goes viral: A look at her most recent Twitpics >>

Where did this Rihanna-directed anger even come from? So far, no one can figure it out.

Bynes continued her rant, though, adding, “No one wants to be your lover so you call everyone and their mother that I almost named my new dog Rihanna.”

Actually, Bynes, plenty of guys want to be RiRi’s lover. Don’t you remember the beef between Chris Brown and Drake? Hey! Maybe that’s why Bynes is up in arms over Rihanna. Could it be because, as she recently admitted, she wants Drake for herself? We’re not sure. Nor can we fully decipher what Bynes was trying to convey in the second half of her tweet, following the part about “No one wants to be your lover.”

Rihanna finally responded, though she played coy by not naming Bynes’ Twitter account in her post. Rihanna wrote, “Ya see what happens when they cancel Intervention?”

“Unlike ur fugly faced self I don’t do drugs!” she shot back. “U need the intervention dog! I met ur ugly face in person! U aren’t pretty u know it!”

OK then. Hopefully, Rihanna continues to take it all in stride and Bynes can get things figured out — soon. It’ll be interesting to see how this all ends.