It’s almost 20 years later, and women everywhere are still swooning over Uncle Jesse. These top 10 Full House moments with Uncle Jesse will tell you why. 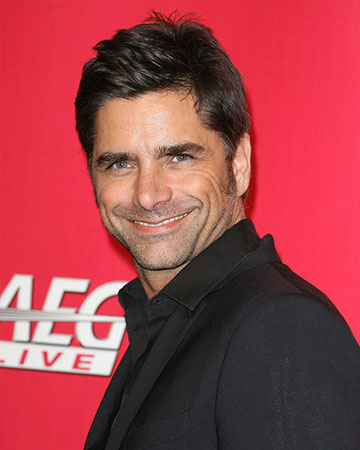 Full House hasn’t aired a new episode since 1995, but we still can’t get enough John Stamos as Uncle Jesse. Can you blame us? He was the perfect combination of bad rocker guy and huggable teddy bear. These are our picks for the top 10 Full House moments with Uncle Jesse.

We first meet Uncle Jesse and the rest of the Tanner crew in the first episode of Full House. When Danny’s wife unexpectedly dies in an accident, Jesse and Joey come to help. In one of the most hilarious scenes from this episode, Jesse and Joey attempt to change their first diaper, under the watchful eyes of Michelle. They change her in a roasting pan using meat tongs and rinse her in the kitchen sink.

A horrible accident turns into some pretty funny material for Uncle Jesse in the first episode of season two. On the way back from the hair salon, Jesse is involved in a motorcycle accident and ends up with two broken arms. Not one to ask for help, he tries to make — and eat — a bowl of cereal with both arms in full casts.

In season two, episode two, Jesse comes face-to-face with Rebecca for the very first time. He tries his best to impress her, pulling out his most suave moves and opening with his classic line, “Have mercy!” She, on the other hand, seems oblivious, says he reminds her of her baby brother and calls him “cute.” Ouch! He can pick us up anytime!

John Stamos and Scott Baio together! How could this scene not make our top 10 list? In season three, episode nine, Jesse’s old friend (played by Baio) comes to town and brings back some of Jesse’s old bad boy ways. In our favorite scene from that episode, the boys’ old band, Feedback, reunites and performs “You Make Me Wanna (Shout)” in the living room of the Tanner house.

We love to hear Uncle Jesse sing, but it’s even better when he harmonizes with Danny and Uncle Joey! In season four, episode two, Michelle has a hard time getting to sleep after being punished for the very first time. To help get off to dreamland, the trio sing their version of “Teddy Bear.” He can sing us to sleep anytime!

Not every scene with Uncle Jesse was a silly one. In season four, episode 20, Jesse is now a married man and is getting ready to move out of the Tanners’ home and in with Rebecca. In one heart-wrenching scene, he has to explain the move to Michelle and tell her goodbye. The scene ends with Michelle giving Uncle Jesse her beloved stuffed pig and Uncle Jesse giving her his prized pink bunny picture — a scrap of wallpaper from his old room. He hugs her goodbye and then cries in the hallway outside her room.

In the first episode of season five, Jesse arrives home to a pregnant Rebecca after spending the summer on the road with his band. In our favorite scene from this episode, the couple bickers at the doctor’s office over whether or not to find out the gender of their baby. They get more than they expected when the doctor reveals the big news — it’s twins! Rebecca celebrates the idea immediately, but Jesse freezes in fear. The look on his face makes the scene!

In season five, episode 18, Danny’s sister comes to town with her pet monkey — and the monkey takes a liking to Uncle Jesse (who can blame her?). In one scene, Rebecca comes into their bedroom to find Jesse sleeping and the monkey fondling Jesse’s hair. Thinking it’s Rebecca, Jesse starts talking a little dirty. Becky can barely contain her laughter when the monkey starts to spank Jesse. He finally realizes it’s not, in fact, his wife in bed with him when he brushes his hand on the monkey’s hairy back.

In season six, episode six, Jesse reveals to the family that he’s a high school dropout and wants to go back to school. He acts tough, but it’s clear that he’s embarrassed. In a precious moment, he confesses the news to his toddler twins, obviously feeling bad about being a bad example. They give him hugs and kisses in return, giving Uncle Jesse his fist big smiles of the episode.

The last episode of season eight is a tearjerker and Uncle Jesse has the most powerful line of all. In the episode, Michelle falls off a horse and suffers amnesia, forgetting the entire family. In the last scene, the rest of the clan is sending DJ off to her prom when Michelle comes down the stairs. She remembers everyone, but has no memory of the accident or her amnesia — it’s a miracle!

Want to watch the final scene? Here it is!