Even when he was rocking a mullet as Full House’s Uncle Jesse, no one could deny John Stamos’ appeal. While Stamos is a household name, he has lived his personal life relatively far from the spotlight. Sure, there was the marriage with Rebecca Romijn, but when that went bust, Stamos became your average Joe. Well, at least as average as fame affords. Here’s what you don’t know about the blue-eyed hunk. 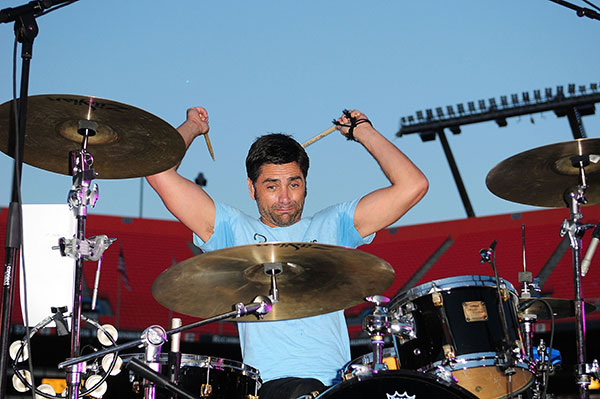 He’s a musician, too!

If the Elvis Presley nods on Full House didn’t set off your musician detector, maybe his fruitful repertoire will. He’s performed on Broadway as well as with Mike Love’s incarnation of The Beach Boys. Stamos considers himself a drummer first.

He has a lifetime pass to Disneyland. Surely those eyes let him go straight to the front of the lines. He also purchased a sign that was at the park’s entrance for $30,700 on eBay.

He’s dated some other hotties

Not only did Stamos wed Rebecca Romijn, but he has had high profile romances with Paula Abdul, Krista Allen, Lori Loughlin and Demi Moore. A full list of ’90s 10s!

That’s not his birth name

His real last name is Stamotopoulos, which might be easy to conclude is from Greek descent. That explains his olive skin, all right.

The actor will turn 50 in August, proving once and for all that the fountain of youth really does exist. Eat your heart out, Clooney.

Even he once flipped burgers

Stamos spent the majority of his teen years working at Duke’s and Yellow Basket restaurants, based out of Orange County, California.

He gets down and dirty with celebrities

Stamos has a web series called Losing Your Virginity With John Stamos in which he interviews celebrities about their first sexual experience. Oddly, that title was also our biggest wish in the ’90s.

Google pictures of John Stamos’ belly button and you’ll find something out of the norm. But hey, it’s not a deal breaker. That’s for sure. After all, he completely owns it.

He still considers himself a theater geek

According to his Twitter page, Stamos is still all about performing on Broadway and never outgrew his love of the stage.

He and his Full House co-star never got together

CORRECTION: Actually, they did! Briefly when they were very young, the two went on a date. Recent reports have Stamos saying “[We] went on a date to Disneyland before, you know, before we were both married. In real life, when we were 18, 19 years old. We did have some off timing, but no disrespect to her family and her husband now, I would say that she could be the one that got away.”