We’ve been craving Kevin Bacon since he made us wish we were Ariel on Footloose. No matter what role he’s taken on (and thankfully there have been many), he’s delivered up sizzlin’ goodness. Here we celebrate the man who we hope keeps bringing home the bacon for years to come… 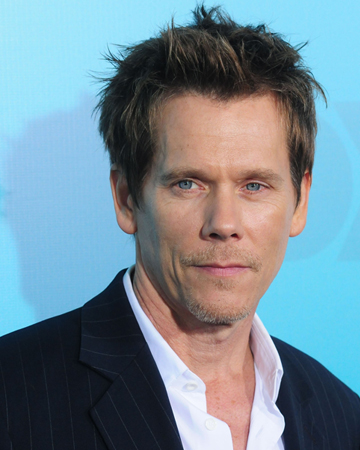 We’ve been craving Kevin Bacon since he made us wish we were Ariel on Footloose. No matter what role he’s taken on (and thankfully there have been many), he’s delivered up sizzlin’ goodness. Here we celebrate the man who we hope keeps bringing home the bacon for years to come…

Not only is this fine slice of Bacon a handsome beast, he’s also long committed to his wife (very sexy), has built a successful career taking a backseat in movies and is a rock star. Literally.

During his River Wild days (excellent movie if you haven’t seen it), Kevin joked that due to all his character roles, he had worked with just about everyone in Hollywood. Four college kids took that concept to the next level one day when they tuned in to a Kevin Bacon movie marathon. The challenge was to pick a random celebrity and link them back to Kevin Bacon in six steps or less. Once the foursome realized they had a legit parlor game on their hands, they wrote a letter to Jon Stewart and appeared on Jon Stewart and Howard Stern’s shows with Bacon. When developing the game for Google TV, Kevin and the design team were trying to get his appearance just right. Bacon told Insider TV, “It’s just so silly. I loved it.”

Our favorite second in command

How much did we love Kevin Bacon in the original Footloose as the rebellious, tight-jean wearing, warehouse dancing Ren McCormack? Bacon’s post-Footloose career became an impressive catalog of movies where he was not cast as the lead role. We got to admire a uniformed Bacon as Captain Jack Ross in A Few Good Men (Tom who?). In Apollo 13, we thought there were few people we’d rather rocket into space with than Kevin Bacon. In River Wild, he co-starred with Meryl Streep as the creepy but sexy bank robber (who could kidnap us anytime!). When The Telegraph asked Bacon if he had come to terms with playing “the Other Guy” as Bacon calls it, he answered, “I still have my anxious moments. There is always some place better that you think you should be. I call this time of year ‘The Bitter Season,’ because I sit around watching everyone else get nominated for Oscars.”

While Bacon may not have any recent Oscar nominations, how many Hollywood leading men have their own parlor game? Besides, Kevin is the first in command on the wildly popular television series The Following, where Bacon plays an FBI agent, in constant pursuit of the leader of a cult of serial killers. Bacon told CNN, “I wanted to do something that was about life and death. When I was trying to choose a series, I wanted to be the hero. I wanted the character to be complex and flawed, because that’s the kind of [hero] that I like to play. That’s the kind of [hero] that I like to see.” Really? Because a complex, flawed hero is exactly the kind of Man Candy we like to see.

Every gal loves a guy who can step in front of a mic and look good doing it. Kevin is one such talent and has been in a band, The Bacon Brothers, with his brother since he can remember. On the band’s official website, Kevin says, “My earliest memory of music was what my brother was playing or the music he brought home. I would sit on the steps of our basement while he was downstairs practicing with our sister, Hilda, and their band. So my heroes growing up were all rock ‘n’ rollers. I wasn’t really into sports, or even movies. If I could save money, I’d buy an album.”

Kevin’s brother Michael is quick to commend his sibling’s writing ability. “Kevin writes a lot more songs than I do. While I spend a lot of time writing instrumental music, lyrical songs are tougher. If I write one or two a year that I like, then I’m happy. But Kevin has this amazing gift of turning everyday experiences into universal thoughts that everybody can identify with.”

A guy who can sink his teeth into any role and is a masterful songwriter and musician? That’s hot.

Unless you were born yesterday, you know that Kevin Bacon has been married to the equally talented Kyra Sedgwick since 1988, and the couple have two grown children together. When Redbook asked Bacon how he knew Sedgwick was the one, he answered, “When I look back, the thing that blows my mind is how young she was when we met. But she had this wisdom. With a lot of actors, you’ve got to chip through the surface to see who the real person is. But she didn’t have any of that. She was this very tough, smart, very real person, incredibly emotional and passionate. It didn’t seem weird to me that we were getting married and having kids so quickly.”

We all knew this couple was close, but even they didn’t know how close until recently. When Kevin and Kyra agreed to let the PBS series Finding Your Roots explore their genealogy, they learned they are distant cousins! It seems even Kyra can’t escape the Six Degrees of Kevin Bacon game!