Here are the men who will make you swoon, raise an eyebrow and, let’s be honest, yell at your television on the upcoming season of The Bachelorette. 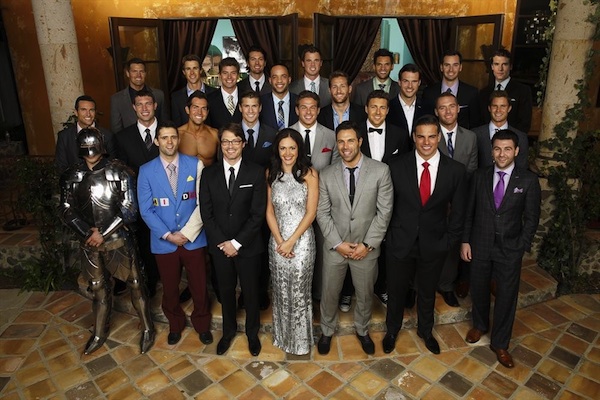 Remember Desiree Hartsock from Sean‘s season of The Bachelor? She’s the sweet one with the crazy brother. Yup, that one. Well, she’s the new “it” girl on The Bachelorette. Those poor men. Here are the 25 hotties (with some comments about the standouts) who will discover whether they love Desiree enough to put up with her family.

He isn’t getting out of that limo alone. This entrepreneur from Texas also brings his son along for the ride to meet Desiree on the first night.

What to expect on this season of The Bachelorette >>

The writer in us loves him. He wrote a book of poetry. Artistic and good looking!

Diogo thinks he’s Desiree’s knight in shining armor. In fact, he will be the knight of the first rose ceremony — expect a full costume for this guy.

This bachelor is a former pro soccer player from Venezuela. We’re intrigued.

An intellectual for you this season. This bachelor is an ER doctor who is excited to meet Chris Harrison and maybe a lady friend too.

We’re putting Michael in our top picks for Desiree. He’s funny (just read his questionnaire on ABC’s website) and goal oriented (a federal prosecutor who wants to be an assistant U.S. attorney), and he says he approaches women without any gimmicks.

This magician isn’t afraid to admit he’s a momma’s boy. They talk on the phone every day.

Who needs a shirt and tie when you have abs of steel? Not Zak W. He’ll arrive for the first rose ceremony without either.

Don’t be fooled by his looks. He’s a goofball at heart who likes Will Farrell and The Hangover.

His momma raised him right, ladies. His biggest fear on a date is going to grab his wallet at the end of the night and not being able to find it.

Dan is already looking ahead — and not to a future with Desiree. He made sure to tell producers that, if things don’t work out, he’s more than willing to be the next bachelor.

A boy after our own hearts. His hometown is Scottsdale, Arizona, just like SheKnows. Looks and profession aside (he’s got both), he gets major brownie points for the city.

Oops. He’s probably not going to make it very far. Upon their first meeting, he presents Desiree with a key to a fantasy suite, offering her the chance to forgo the other men. She quickly tells him she’s not that kind of girl.

His ideal date is at Costco. Don’t let the location fool you. He explains that food “connects childhood memories, family stories, current lifestyles and financial strategy.”

Another of our favorites. He’s a passionate and successful investment adviser in New York but thinks the most romantic city is Burlington, Vermont, because it’s a “very small, quaint town with lots of mountains and fancy restaurants.”

Robert is another Arizona boy from Glendale.

This cutie says he doesn’t have an ideal mate. On his Bachelorette questionnaire, he said, “I’ve learned beauty is common and it’s all about the connections you share with that special someone.”

Common themes among the men

A lot of them said if they had a superpower, they would want to be able to fly. Will even said he’s working on his leg strength so he can jump high and hopefully emulate the feeling of flying.

They have pretty bad handwriting. The exceptions are Drew and Diogo.

When asked who they would be for a day, most of the guys said Tom Brady. Apparently, Super Bowl wins and a wife named Gisele are common ideals for men.

Most of the men said their long-term relationships ended because — while they liked the girl — they just didn’t see themselves marrying her.

The majority of men said their ideal mate’s personality is genuine and happy.

Almost every single guy said being married means having a best friend.

Who are your favorite picks this season?