Vince Vaughn gets some life-altering news in Delivery Man. In the teaser trailer, he learns that he’s a father to a ridiculous number of kids. One child is a shock — 500-plus is really pushing it. 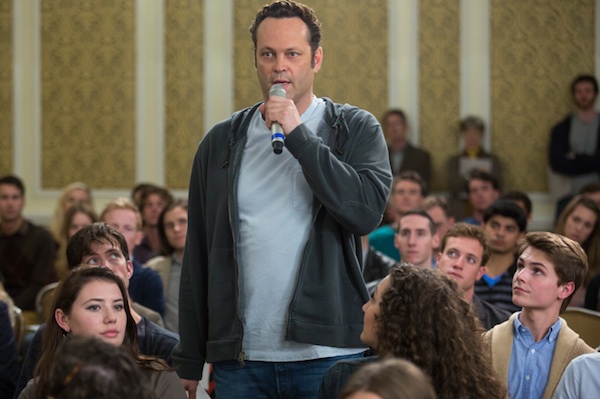 DreamWorks has released a sneak peek at its new comedy, Delivery Man. It stars Vince Vaughn and will hit theaters just in time for the holidays. But this is no Fred Claus (2007). Instead, it’s a story about a man and his children — all 533 of them.

Delivery Man centers on an underachiever named David Wozniak (Vaughn). His lackluster life gets turned upside down when he learns that he’s fathered multiple adult children. Not only that, but they’ve banded together to find him.

Sandra Bullock and other actors who play the same characters >>

How could this happen? Back in the early 1990s, Dave made a donation to a sperm bank, and now it’s come back to haunt him. Over two decades have passed, and 142 of the 533 kids he helped create want to know his identity. In other words, they want to see the other half of their gene pool.

Vaughn and Wilson can’t hack Google in The Internship >>

Dave’s put in an awkward position. His life is in the dumps, he’s indebted to the mob and his pregnant girlfriend just left him. This might not be the best time to meet his unknown offspring. Delivery Man follows Dave as he struggles with whether or not to show these kids who he really is.

Check out the teaser trailer below

His reaction may seem over the top, but how would you feel if someone showed up on your doorstep with that kind of news?

Does Vaughn have another hit on his hands?