Lucrezia is exposed to Giuliano and Da Vinci as the traitor, leading to deadly consequences. Any and all pity for her is gone. 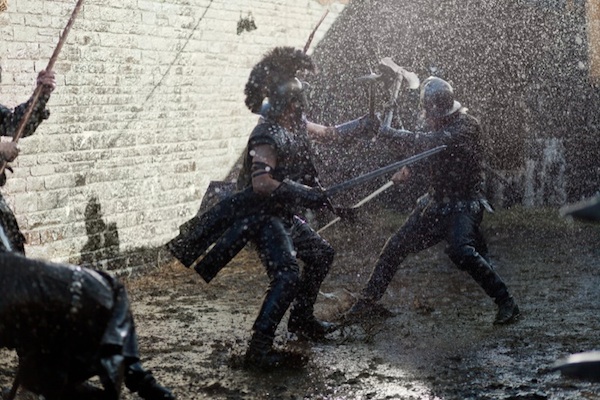 It’s a sad day in Florence after this week’s episode of Da Vinci’s Demons. They just don’t know it yet. What is Starz thinking?

Da Vinci (Tom Riley) seeks the second key to open the Vault of Heaven in his quest to find the Book of Leaves. He believes the key is somewhere in the Vatican archives and comes up with a plan to break in. Da Vinci knows the only way into the city uninvited is through the drains, and he creates a device like a scuba mask to breathe underwater and enter the city.

Riario and the guards realize the pope is missing and break into the archives. Da Vinci runs, but he leaves without the key.

On his way out of the city, Da Vinci stumbles upon a prisoner who he discovers is Lucrezia’s father. Da Vinci puts the pieces together then and knows Lucrezia is the traitor.

Lorenzo and Clarice are celebrating Ash Wednesday along with another victory. They have successfully arranged the marriage of Giuliano to Camilla Pazzi. The Pazzis have long been an enemy of the Medicis, and Lorenzo is hopeful this arrangement will secure an ally.

Unknown to the Medicis, Francesco Pazzi has no intention of allowing the engagement to lead to a wedding. He is planning to poison both Lorenzo and Giuliano as soon as opportunity strikes. He is only pretending to go along with the engagement to gain their trust until he can overthrow their rule.

While Da Vinci is inside the Vatican walls, Zoroaster and Nico wait for him on a boat just outside the city. When they see the scuba mask rise from the water, they think Da Vinci has safely returned from the city. The man inside the mask, however, is Riario. He almost kills Zoroaster before Nico hits him over the head. The two take Riario prisoner.

Nico is furious with Riario and goes to kill him, but something solid underneath Riario’s shirt stops Nico’s blow. It is the second key, worn around Riario’s neck.

Da Vinci arrives back on land and meets up with his friends, who are holding Riario captive. Da Vinci takes the key from Riario and leaves him tied to a tree.

Giuliano is furious about the engagement to the Pazzis. He gets drunk and sleeps with Vanessa. She knows they can never be together but is content to have him when she can.

Giuliano continues his quest for the traitor by looking through the curfew notes. He is able to match Lucrezia’s name with the instances of betrayal and heads to find her at her aunt’s house, where she is reportedly staying. The aunt tells him that Lucrezia has already left for Florence.

Giuliano follows her trail and finds Lucrezia just before she is raped and murdered by the Vatican guards. Giuliano fights and kills the Vatican guards and then intends to take Lucrezia back to the Medicis so she can face the consequences of her traitorous actions. Lucrezia has a dagger, though, and stabs Giuliano, leaving him in the river to die.

Please tell me there is some catch here where he really isn’t dead. I don’t know what the show will be without loveable Giuliano.

Do you think Giuliano will die and Lucrezia will escape? Share your ideas in the comments!