Vin Diesel loves performing his own stunts, but one particular stunt on the set of Fast & Furious 6 had even him quaking in his boots. 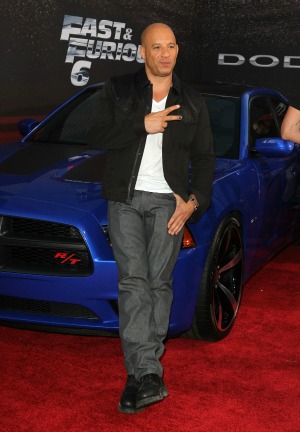 Vin Diesel takes his job of action star very seriously. On the set of Fast & Furious 6, he might have taken it a bit too seriously since he almost had a major accident while shooting the film.

In an interview with MTV News, Diesel talked about a pretty dangerous stunt that was performed for the action series. The actor is a pro when it comes to doing his own stunts, but even this sequence might have been too much for his capabilities.

He told the cable channel, “I’m in my Dodge Daytona, and they said, ‘We want you to drive through this smoke.’ While I’m waiting, I’m seeing these guys pull over these huge tanks of gas and pouring them into those gas-explosion things. And I hear ‘action,’ and as I’m getting closer, I see flames coming out of these gas tanks. Once I get to the gas tanks, it’s like two giant fireballs were shot at my car.”

That scary moment not only startled the buff star, it caused total chaos on set.

He said, “I saw all of these paramedics, I saw the fire department, and I was like, ‘What are these people doing here?’ My equilibrium was off, because the explosions came through the window, and they wanted me to slalom a little bit when I came out like I was out of control. So I did that, and everyone was running over like, ‘I think we lost him!’ “

Vin Diesel shows his softer side by singing Rihanna’s “Stay” >>

Luckily, the actor was safe, but it’s probably not a stunt he wants to repeat any time soon.

One of his fellow cast members, Paul Walker, did see an upside to the incident.

Referring to Diesel’s bald head, Walker joked, “With flash burns being a concern and all of that, when he pulled over, they said, ‘At least it was Vin.’ Because if it was anybody else, it would have singed their hair!”