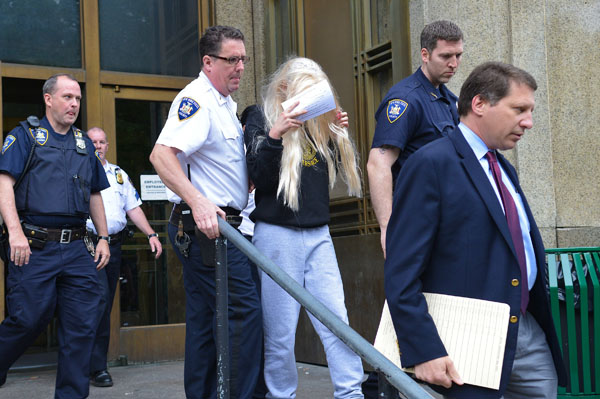 Amanda Bynes is back on the streets of New York after her Thursday night arrest for reckless endangerment, tampering with physical evidence and physical possession of marijuana.

The 26-year-old — clad in a seriously disheveled blond wig, black sweater and gray sweatpants — appeared in a Manhattan court late Friday morning to answer the charges. Her lawyer, Andrew Friedman, claimed that the police illegally followed her into her West 47th Street luxury apartment.

And the bong she allegedly threw out the window? It was “just a vase,” she said.

However, the police report says otherwise. According to TMZ, the officer — clad in “full police uniform” — wrote that he “observed [Amanda] grab said bong, run to the westbound-facing window, and throw it out the window where numerous pedestrians were walking on the 8 Avenue and West 47 Street sidewalks below.”

Luckily, no one was injured.

The judge released Bynes without bail but warned her that she will face immediate arrest if she misses her next court date on July 9. She agreed and left the court in a taxi.

Bynes hasn’t yet talked about the incident. Her Twitter account — usually her outlet for all things nudity and Drake — is quiet.

We have to wonder, though: Will she vow to sue the NYPD? It seems like she wants to sue everyone, from Perez Hilton and US Weekly to her latest foe, In Touch Weekly. Bynes vowed to take the gossip magazine to court for publishing “fake” photos in a recent cover story.

“That’s not my bed! Those aren’t my toes! My toes are pedicured!” she tweeted earlier this week. “They used an old shot of me on the cover with a bad angle of my old nose before I had surgery to reshape my profile and to remove the webbing from my eyes.

“I have to sue because that’s not my apartment, those aren’t my clothes!” she continued, saying that the weekly magazine “morphed photos of my face onto someone’s body to ruin my life!”

“I have to make a big deal of this and sue because that’s not me! I care about my appearance so I have to defend myself! I look like a different person now that I had surgery.”